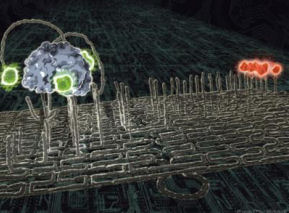 Scientists from Columbia University, Arizona State University, the University of Michigan, and Caltech have programmed an autonomous molecular “robot” made out of DNA to start, move, turn, and stop while following a DNA track.

Caltech’s Erik Winfree explained that shrinking robots down to the molecular scale would provide, for molecular processes, the same kinds of benefits that classical robotics and automation provide at the macroscopic scale. Molecular robots, in theory, could be programmed to sense their environment (say, the presence of disease markers on a cell), make a decision (that the cell is cancerous and needs to be neutralized), and act on that decision (deliver a cargo of cancer-killing drugs).

But with that promise comes a practical problem: how do you program a molecule to perform complex behaviors? In normal robotics, the robot itself contains the knowledge about the commands. But with individual molecules, information storage in the “robot” is impossible. Columbia’s Milan Stojanovic says the solution is to imbue the molecule’s environment with informational cues.

“We were able to create such a programmed or ‘prescribed’ environment using DNA origami,” explains Hao Yan, from Arizona State. DNA origami is a type of self-assembled structure made from DNA that can be programmed to form nearly limitless shapes and patterns. Exploiting the sequence-recognition properties of DNA base pairing, DNA origami are created from a long single strand of DNA and a mixture of different short synthetic DNA strands that bind to and “staple” the long DNA into the desired shape. The origami used in this case was a rectangle that was 2 nanometers thick and roughly 100 nanometers on each side.

The researchers then constructed a trail of molecular “bread crumbs” on the DNA origami track by stringing additional single-stranded DNA molecules, or oligonucleotides, off the ends of the staples. These represent the cues that tell the molecular robots what to do – start, walk, turn left, turn right, or stop, for example – akin to the commands given to traditional robots.

To build the 4 nanometer diameter molecular robot, the researchers started with a common protein called streptavidin, which has four symmetrically placed binding pockets for a chemical moiety called biotin. Each robot leg is a short biotin-labeled strand of DNA. “It’s a four-legged spider,” quips Stojanovic. Three of the legs are made of enzymatic DNA, which is DNA that binds to and cuts a particular sequence of DNA. The spider also is outfitted with a “start strand” – the fourth leg – that tethers the spider to the start site (one particular oligonucleotide on the DNA origami track). “After the robot is released from its start site by a trigger strand, it follows the track by binding to and then cutting the DNA strands extending off of the staple strands on the molecular track,” Stojanovic explained.

“Once it cleaves,” adds Yan, “the product will dissociate, and the leg will start searching for the next substrate.” In this way, the spider is guided down the path laid out by the researchers. Finally, explains Yan, “the robot stops when it encounters a patch of DNA that it can bind to but that it cannot cut,” which acts as a sort of flypaper.

Although other DNA walkers have been developed before, they’ve never ventured farther than about three steps. “This one,” says Yan, “can walk up to about 100 nanometers. That’s roughly 50 steps.”

Stojanovic is aware of the current system’s limitations. “Interactions are restricted to the walker and the environment. Our next step is to add a second walker, so the walkers can communicate with each other directly and via the environment. The spiders will work together to accomplish a goal,” he explained.

Such collaboration ultimately could be the basis for developing molecular-scale reconfigurable robots – complicated machines that are made of many simple units that can reorganize themselves into any shape – to accomplish different tasks, or fix themselves if they break. “The idea is to have molecular robots build a structure or repair damaged tissues,” says Stojanovic. “You could imagine the spider carrying a drug and bonding to a two-dimensional surface like a cell membrane, finding the receptors and, depending on the local environment,” adds Yan, “triggering the activation of this drug.”