You are here: Home › News › Novel “Walking” Molecule Mooted For Nano-Abacus
By Will Parker on September 27, 2005 in News 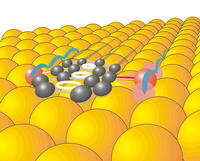 A novel molecule that “walks” like a human could be a key component in future molecular computers. The molecule, known as 9,10-dithioanthracene (DTA), has two linkers that the researchers say act as feet. It obtains energy from heat supplied to it and then moves in a way so that only one of the linkers is lifted from the surface at a time. The remaining linker guides the motion of the molecule and keeps it on a straight course. Alternating the motions of its two linkers, DTA is able to walk in a straight line without the assistance of any external guidance mechanism.

The research team, from the University of California at Riverside, said the molecule’s motion was extremely stable. “In tests, DTA took more than 10,000 steps without losing its balance once.

Our work proves that molecules can be designed deliberately to perform certain dynamic tasks on surfaces,” said research leader Ludwig Bartels. “Similar to a human walking, where one foot is kept on the ground while the other moves forward and propels the body, our molecule always has one linker on a flat surface, which prevents the molecule from stumbling to the side or veering off course.”

The walking molecule offers a new approach for storing large amounts of information according to the researchers. Strangely enough, the hardware for such a molecular computer might resemble an abacus. “This offers an easy realization of a concept for molecular computing proposed by IBM in the 1990s, in which every number is encoded by the position of molecules along a line similar to an abacus, but about 10 million times smaller. IBM abandoned this concept, partly because there was no way to manufacture the bars of the abacus at molecule-sized spacing,” explained Bartels. But with the guidance problem out of the way, Bartels says that an abacus-like molecular memory using DTA would be more than 1000 times more compact than current silicon devices.

The researchers, whose work will be published in Physical Review Letters, are now working on another component of the abacus, a molecular ratchet, which would convert random thermal oscillation into directed motion. “It would be similar to an automatic watch that rewinds itself on the arm of the bearer – except that it would be just one nanometer in diameter,” Bartels said.