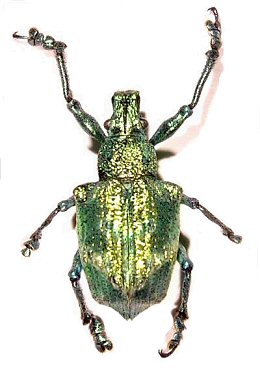 Creating an ideal “photonic crystal” to manipulate visible light in optical computers may now be possible, thanks to a beetle from Brazil whose shimmering, iridescent green scales provide the ideal, diamond-like crystalline structure.

“It appears that a simple creature like a beetle provides us with one of the technologically most sought-after structures for the next generation of computing,” says study leader Michael Bartl, from the University of Utah. “Nature has simple ways of making structures and materials that are still unobtainable with our million-dollar instruments and engineering strategies.” Bartl’s work, documented in the journal Physical Review E, reveals that the inch-long beetle, known asLamprocyphus augustus, has scales that are the ideal architecture for a photonic crystal.

The beetle’s scales themselves can’t be used in technological devices, however, because they are made of fingernail-like chitin, which is not stable enough for long-term use. Bartl and co-researcher Jeremy Galusha are now attempting to design a synthetic version of the beetle’s photonic crystals, using the scales as a mold to make the crystals from a transparent semiconductor.

Photonic crystals will play an important role in ultrahigh-speed computers that use optical integrated circuits that run on light instead of electricity. “You would be able to solve certain problems that we are not able to solve now,” Bartl says. “For certain problems, an optical computer could do in seconds what regular computers need years for.”

The ideal photonic crystal – dubbed the “champion” crystal – was described by scientists in 1990. They showed that the optimal photonic crystal – one that could manipulate light most efficiently – would have the same crystal structure as the lattice of carbon atoms in diamond (diamond itself can’t be used for photonic crystals as its atoms are packed too tightly together to manipulate visible light). When made from an appropriate material, a diamond-like structure would create a large “photonic bandgap,” meaning the crystalline structure prevents the propagation of light of a certain range of wavelengths. Materials with such bandgaps are necessary if researchers are to engineer optical circuits that can manipulate visible light.

Bartl says the beetle piqued his interest because it was iridescent regardless of the angle from which it was viewed – unlike most iridescent objects – and because a preliminary electron microscope examination showed its scales did not have the structure typical of artificial photonic crystals. “The color and structure looked interesting,” Bartl says. “The question was: What was the exact three-dimensional structure that produces these unique optical properties?”

Using a scanning electron microscope, the researchers determined the crystal structure of the beetle’s scale material to be a diamond-like architecture, but with building blocks of chitin and air instead of the carbon atoms in diamond. Next, they used optical studies and theory to predict optical properties of the scales’ structure. The prediction matched reality: green iridescence. Many iridescent objects appear that way only when viewed at certain angles, but the beetle remains iridescent from any angle. Bartl says the way the beetle does that is an “ingenious engineering strategy” that approximates a technology for controlling the propagation of visible light.

He added that a single beetle scale is not a continuous crystal, but includes some 200 pieces of chitin; each with the diamond-based crystal structure but each oriented a different direction. Thus each piece reflects a slightly different wavelength or shade of green. “Each piece is too small to be seen individually by your eye, so what you see is a composite effect,” with the beetle appearing green from any angle.”

Grandpa’s Soap Alive And Kicking
Incense Found To Be Psychoactive