You are here: Home › News › Physics › Synthetic magnetism used to control light
By Will Parker on November 1, 2012 in News, Physics 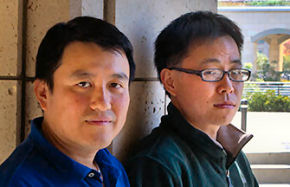 The use of magnetic fields to control electrons is a founding principle of electronics and all the consumer electronic devices in use today. When an electron approaches a magnetic field, it meets resistance and opts to follow the path of least effort, travelling in circular motion around the field. Now, Stanford researchers say they have developed a device that uses synthetic magnetism to allow a similar level of control over photons.

Described in a paper published in Nature Photonics, the process breaks a key law of physics known as the time-reversal symmetry of light. The researchers behind the discovery say it could yield an entirely new class of devices that use light instead of electricity for applications ranging from accelerators and microscopes to speedier on-chip communications.

“This is a fundamentally new way to manipulate light flow. It presents a richness of photon control not seen before,” said Shanhui Fan (pictured left), a professor of electrical engineering at Stanford and senior author of the study.

The Stanford solution capitalizes on recent research into photonic crystals – materials that can confine and release photons. To build their device, the team members created a grid of tiny cavities etched in silicon, forming the photonic crystal. By precisely applying electric current to the grid they can control – or “harmonically tune,” as the researchers say – the photonic crystal to synthesize magnetism and exert virtual force upon photons. The researchers refer to the synthetic magnetism as an effective magnetic field.

Fan said his team was able to alter the radius of a photon’s trajectory by varying the electrical current applied to the photonic crystal and by manipulating the speed of the photons as they enter the system. This dual mechanism provides a great degree of precision control over the photons’ path, allowing the researchers to steer the light wherever they like.

For engineers, breaking time-reversal symmetry means that a photon travelling forward will have different properties than when it is traveling backward, yielding important technical possibilities. “The breaking of time-reversal symmetry is crucial as it opens up novel ways to control light. We can, for instance, completely prevent light from traveling backward to eliminate reflection,” explained Fan.

The new device could solve one major drawback of current photonic systems that use fiber optic cables. Photons tend to reverse course in such systems, causing a form of reflective noise known as backscatter which degrades performance. Using the new device, however, once a photon enters, it cannot go back. This quality, the researchers believe, will be key to future applications of the technology as it eliminates disorders such as signal loss common to fiber optics and other light-control mechanisms.

“Our system is a clear direction toward demonstrating on-chip applications of a new type of light-based communication device that solves a number of existing challenges,” said co-researcher Zongfu Yu (pictured right). “We’re excited to see where it leads.”