You are here: Home › News › Females Get Into Sexual Selection Game
By Will Parker on January 11, 2007 in News 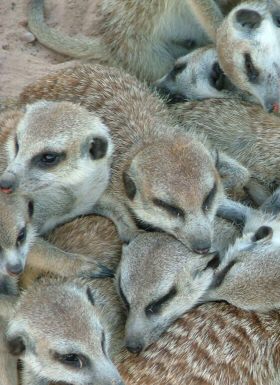 “Meerkats are ideal models for exploring sexual selection independent of parental investment, because they are cooperative breeders,” said Prof. Timothy Clutton-Brock, principal investigator of Earthwatch’s Meerkats of the Kalahari project. Meerkats breed cooperatively in groups of 3 to 50 where all of the members of that group work together to raise and protect their pups, most of which are the offspring of the dominant pair. Past research suggested that males were the object of sexual selection because they usually invested less energy in their offspring than their female counterparts. Without the full-time job of rearing their young, males are more often free to strut and shove and preen to maximum effect.

Clutton-Brock suggests that these findings call for an examination of definitions of sexual selection. Current use tends to emphasize competition between males for mates. The alternative proposed by the authors is to return to Darwin’s description that involves competition for reproductive opportunities, a broader definition that could include competition between cooperatively breeding females.

Use The Force, Luke
Human Diaspora May Have Occurred Later Than Previously Thought