You are here: Home › News › Huygens Countdown Starts
By Will Parker on January 5, 2005 in News 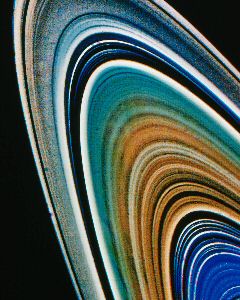 The European Space Agency (ESA), is counting down to January 14, when the Huygens space probe will parachute onto Titan’s surface – the most distant landing any human-made object will have ever made in the solar system. Also involved are a dozen University of Arizona researchers who will join their international colleagues in Germany for the culmination of one of the most ambitious robotic space missions ever attempted .

Titan – larger than Mercury and Pluto – is the only moon in the solar system with an atmosphere. Scientists believe its mostly nitrogen atmosphere may resemble Earth’s before life began. Scientists theorize that methane rains from Titan’s sky, creating surface methane or ethane lakes, which may give rise to clouds, similar to the way the water cycle works on Earth. Scientists will study Titan’s thick atmosphere, clouds and virtually unseen surface with six science experiments on Huygens during the probe’s descent.

Martin Tomasko of the University of Arizona’s Lunar and Planetary Laboratory leads the international team with the only optical instrument on the probe. Tomasko and eight other researchers will study aerosol particles in Titan’s atmosphere and take photographs of the surface as the probe spins downward. Huygens will relay its data to the Cassini orbiter, which then transmits the signals – which will take 67 minutes to reach Earth – to NASA’s Deep Space Network.

The probe’s three cameras will take about 750 images, or 250 “triplet” images, as the probe spirals toward Titan’s surface. The team on Earth will mosaic these images into 20 panoramic views of the ground and horizon in various resolutions. At an altitude of 12 miles, all data are relayed back to the Cassini orbiter to ensure that it won’t be lost on touchdown impact. At two-fifths of a mile above the surface, a 20-watt lamp on will switch on and replace the colors of sunlight filtered out by Titan’s atmospheric methane.

The probe has enough battery power for instruments to continue taking data for more than 30 minutes on Titan’s surface – if they survive landing. The force of landing will be like “riding your bicycle into a brick wall,” said team leader Tomasko. The Cassini orbiter can receive Huygens ground data until it travels beyond Titan’s horizon. The team expects to receive its first dataset after 8 p.m. on Friday, Jan. 14, (Central European time).