You are here: Home › Humans › News › Is the quest for romance causing the gender gap in science?
By Will Parker on August 16, 2011 in Humans, News 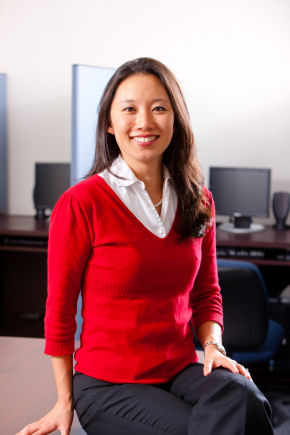 Four new studies from the University at Buffalo suggest that the goal of being romantically desirable is causing the persistent gender gap in the fields of science, technology, engineering and math (STEM). The studies, published in Personality and Social Psychology Bulletin, were undertaken to determine why women, who have made tremendous progress in education and the workplace over the past few decades, continue to be underrepresented at the highest levels of STEM.

According to lead author Lora Park (pictured), when romantic goals are activated, either by environmental cues or personal choice, women – but not men – show less interest in STEM and more interest in fields such as the arts, languages and English.

“When the goal to be romantically desirable is activated, even by subtle situational cues, women report less interest in math and science. Gender scripts discourage women from appearing intelligent in masculine domains, like STEM,” Park says, “and in fact, studies show that women who deviate from traditional gender norms, such as succeeding in male-typed jobs, experience backlash for violating societal expectations.”

In Park’s first study, participants viewed images related to romantic goals (images of romantic restaurants, beach sunsets, candles) or intelligence goals (images of libraries, books, eyeglasses). Participants in Study 2a overheard a conversation about a recent date that someone had gone on (romantic goal condition) or a test that someone had taken (intelligence goal condition). In Study 2b, they overheard a conversation about a romantic date (romantic goal) or about a recent visit from a friend from out of town (friendship goal). After exposure to the romantic, intelligence or friendship goal cues, participants completed questionnaires assessing their interest in STEM vs. other fields and their preference for various academic majors.

The results showed that women (but not men) exposed to cues related to romantic goals reported less positive attitudes toward STEM and less preference for majoring in math or science fields compared to other disciplines. This did not occur when they were exposed to cues associated with intelligence goals or friendship goals.

The final study, Study 3, used a more explicit method of assessing goal pursuit by recruiting women who were interested in pursuing a degree or a career in STEM and asking them to answer questions regarding romantic goal strivings every night for 21 nights (e.g., “Today, I called/emailed/texted someone I was romantically interested in”), math course activities, and daily feelings of attractiveness, likability and desirability.

Park says the results showed that on days when women pursued romantic goals, they engaged in more romantic activities and felt more desirable, but they engaged in fewer math activities. “Overall, the findings from these studies show that women’s romantic goal strivings, which can be triggered by environmental cues or by personal choice, have important implications for the gender gap in attitudes and interest in math and science.”