You are here: Home › News › Saltwater irrigation trial a success
By Will Parker on December 16, 2008 in News 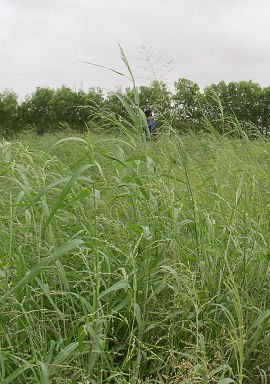 Take an arid field riddled with salty soil. Irrigate it with salty water and plant a salt-tolerant grass along with a salt-sucking companion plant and what do you get? A crop that successfully replaces corn as cattle feed, contend researchers from Brigham Young University (BYU).

Central to the success of the trial was the identification of a plant that can thrive in unusable lands near the coasts in much of the world. “It seems odd that salty soil and salty water could produce useful crops, but that’s what this study showed,” said BYU’s Brent Nielsen, the corresponding author on the study. “It’s exciting to share in work that directly benefits people who need to find more land in order to produce the food and income they need to survive.”

The researchers focused their efforts on a plant called panicum turgidum that can grow in salty conditions. They measured its protein content and determined that it could be a suitable alternative to existing cattle feed. They then tested its growth potential when irrigated with the salty water found in the area. They showed that p.turgidum grew so fast it could be harvested almost monthly. Overall, with limited fertilizer, they produced 60,000 kilograms per hectare during the yearlong study. Nielsen is confident that further studies that determine the best ratios of fertilizer will boost that number over 100,000 kilograms.

P.turgidum is a “salt excluder,” meaning it survives salty conditions by keeping salt out of its system, which most other plants can’t do. Although this allows it to grow on salty water, the extra salt deposited by irrigation would render the soil too salty for even this hardy plant. So the researchers found that planting a companion crop that is a “salt accumulator” prevented the soil from getting too salty. The other plant sucked up the extra salt, then was harvested and burned and the ashes turned into soap. After the year long study, the levels of salt in the soil were virtually unchanged.

The Balochistan region of southern Pakistan, where the test was conducted, is one of the world’s driest places, and the underground water supply is brackish because of its proximity to the Indian Ocean. There is a strong demand for fodder to feed the cattle that are a main source of income in the region, so a crop that can grow successfully in these conditions “would have enormous impact on the quality of life in local communities,” said Ajmal Khan, a professor at the University of Karachi, director of the Pakistani research team and first author on the paper.

“As world populations grow and agricultural land is threatened, this new approach can open up more crops for both livestock and humans,” noted Nielsen. “By being able to transfer production of animal feed closer to the coasts, where you have these salty soils, more useful agricultural lands can be free for vegetable and grain production for human consumption.”