You are here: Home › News › Size Of Genitalia Dependent On Need To Fight
By Will Parker on August 26, 2008 in News 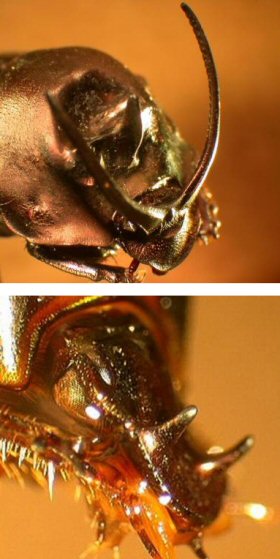 Indiana University researchers examining male horned beetles (Onthophagus Taurus) from four geographically separated populations say the groups have diverged significantly in the size of the male genitalia, and natural selection operating on the other end of the animal – the fighting horns atop the beetles’ heads (pictured) – seems to be driving it much more quickly than expected.

Evolutionary biologists believe changes in genitalia size and shape can spur speciation by making individuals from different populations sexually incompatible. An early “lock and key” model of reproductive isolation was first proposed in the nineteenth century to explain why some pairs of species, outwardly identical in every way, are unable to mate.

Despite what spam emails may want us to believe, variation in male genitalia size within species tends to be very low, for humans and beetles. Yet the four O. Taurus populations studied exhibit substantial changes in both horn and genitalia length – as much as 3.5 times, in terms of an “investment” index the scientists devised that takes body size into account. Native to Italy, O. Taurus exists in other parts of the world only because of recent human activity, indicating that the divergences observed in O. Taurus must have occurred over an extremely short period of time – 50 years or less.

“In terms of the integrity of a species, it’s important for these things not to change too much,” Moczek explains. “So there is a lot of evidence suggesting that within species or within the populations of species, natural selection maintains genital characters. But if these primary sex characters are linked to other characters that can change readily, then you’ve got what we think is a very exciting mechanism that could prime populations for reproductive isolation.”

Horn length and shape can change for many reasons, Moczek says. Among densely populated species, fighting (which favors large horns) may not be an effective strategy for winning mates. As combative males fight each other, a diminutive, smaller-horned male could simply employ a sneaking strategy to gain access to unguarded females. Under these circumstances, reduced investment in horns seems to result in larger copulatory organs. Alternately, in lower density populations, most male beetles spend a great deal of time fighting. Longer, bigger horns could serve these males well – and also lead to smaller genitalia. “If this is all it takes to change genitalia, it may be easier to make new species than we thought,” Moczek mused.

Growing A Home With “Plantware”
Honey, We Shrunk The Cod