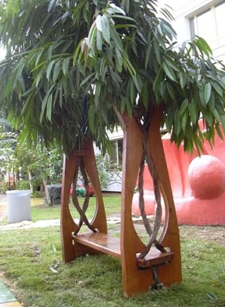 A bus-stop that grows its own foliage as shade? A house built from living tree roots that provides natural protection against earthquakes? These concepts may be science fiction today, but scientists from Tel Aviv University say that eco-architecture using “plantware” may be only a decade away.

The concept of shaping living trees into useful objects – known as arborsculpture or pooktre – isn’t new. But Tel Aviv University Professors Yoav Waisel and Amram Eshel are ready to use this concept as the foundation for a new company that will roll out these structures worldwide. Pilot projects now underway in the United States, Australia and Israel include park benches for hospitals, playground structures, streetlamps and gates.

“The approach is a new application of the well-known botanical phenomenon of aerial root development,” says Prof. Eshel. Certain species of trees grown aeroponically (in air instead of soil and water) do not harden, he explained, adding that “soft roots” can relatively easily turn living trees into useful structures. “Instead of using plant branches, this patented approach takes malleable roots and shapes them into useful objects for indoors and out.”

The original “root-breaking” research was conducted at the Sarah Racine Root Research Laboratory at Tel Aviv University (TAU), the first and largest aeroponics lab in the world. Commercial applications of the research are being developed by Plantware, a company founded in 2002. Plantware CEO Gordon Glazer hopes the first home prototype will be ready in about a decade. While this method of “growing your own home” can take years, the result is long lasting and, according to Glazer, particularly desirable in this emerging age of green architecture.