You are here: Home › News › X Chromosome: The Evolutionary Smoking Gun
By Will Parker on October 18, 2007 in News 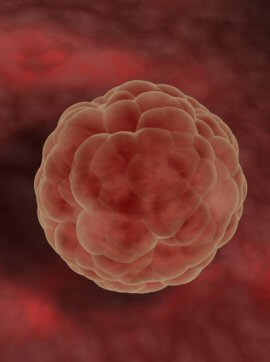 University of Rochester scientists believe they have confirmed a controversial theory that the X chromosome (the female chromosome) is a strikingly powerful force in the origin of new species. The role of the X chromosome in speciation has been a contentious topic for years. Now, in a new study in the journal PLoS Biology, Rochester’s Daven Presgraves has confirmed that the X chromosome is indeed heavily influential – and the reason may be nothing like what biologists expected.

When one species splits into two, interbreeding between the two daughter species is much more likely to produce infertile hybrids when the species exchange X chromosomes than when they exchange any other chromosomes, explains Presgraves. The process, dubbed the “large X-effect,” acts as a wedge between the two newly formed species, pushing them onto divergent evolutionary paths.

For their study, Presgraves and co-researcher J. P. Masly interbred fruit flies for 15 generations. The team painstakingly substituted individual genes of one fly species with the genes of a closely related species, and tracked which genes caused infertility in hybrids. The Rochester team showed that 60 percent of X-chromosome genes cause infertility in hybrid males – far higher than the 18 percent for all the non-sex chromosomes. “There is no more debate,” says Presgraves. “The large X-effect is real.”

But the findings have given rise to another mystery. Scientists expect evolutionary changes in DNA to accumulate in random locations across a genome, but Presgraves instead found that most changes causing hybrid infertility cluster inexplicably on the X chromosome. Presgraves is now looking into why the X is a hotspot for “speciation genes,” that prevent genetic exchanges between closely related species.

Conventional wisdom suggests the large X-effect comes about because the X chromosome is “exposed,” meaning its complement, the Y chromosome, doesn’t have the information needed to mask the effects of changes on the X. We inherit a set of chromosomes from each parent with each chromosome acting as a sort of backup for its complement. “It’s a bit like cross-referencing two encyclopedias for errors,” said Presgraves. In the case of X and Y, however, it’s like trying to cross-reference an encyclopedia with a pamphlet.

But Presgraves believes it’s not a simple case of the X chromosome being exposed. He believes there’s something special about the X. Somehow, it attracts genes that disrupt the creation of sperm in hybrid males – the main cause of the hybrid’s infertility.

“When I look at this, I think the X is not behaving normally during spermatogenesis [sperm creation],” says Presgraves. “I think it may be that in the production of sperm, when the fly’s genome is shut down and compacted to fit into the sperm head, the X is not shutting down and is wrecking the process.”

Presgraves is planning new tests to see if the X is, in fact, refusing to shut down when it should. If the process that controls normal X inactivation during spermatogenesis is particularly susceptible to evolutionary change, says Presgraves, then it may be largely responsible for the X chromosome’s unusually prominent role in the origin of new species.

Speciation and Selection by Mayr, Ernst

Models of Speciation by White, M.J.D.

The Origin of Species, V: Speciation and Mutation

Speciation from the Point of View of Genetics by Irwin, M.R.; Cumley, R.W.

The Origin of Species, V: Speciation and Mutation by Osborn, Henry Fairfield

Land snails of eastern Madeira: speciation, persistence, and colonization by..

Relation Of Ultraviolet- Induced Mutations To Speciation In Dermatophytes by E..