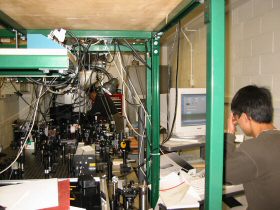 Scientists at the University of Rochester have found a way to change the properties of almost any metal to render it, literally, pitch black. Pitch black metals could increase the efficiency of a multitude of devices such as fuel cells, solar cells, imaging devices, and undoubtedly, fashion items.

The master of darkness behind the discovery, the University of Rochester’s Chunlei Guo, said the discovery was made by accident. “We wanted to see what would happen to a metal’s properties under different laser conditions and we stumbled on this way to completely alter the reflective properties of metals.”

Creating pitch black metals involves exposing them to an ultra-intense femtosecond duration laser pulse (a femtosecond is to a second what a second is to 32,000,000 years). In a few quadrillionths of a second, Guo’s laser unleashes as much power as that generated by the entire North America power grid onto a spot the size of a needle point.

The intense blast alters the surface of the metal, forming nano-sized pits, globules, and strands, which dramatically increase surface area and radiation capture. Guo and his fellow researchers have tested the absorption capabilities for the black metal and confirmed that it can absorb virtually all the light that falls on it.

Pitch black metals should allow far more data to be captured in light detecting devices, making them much more sensitive and efficient. The process could also have applications in replacing black paint, or creating fashion items. Guo reports that the new process has worked on every metal he has tried, and because it’s a property of the metal itself, there are no concerns about the black wearing off. As well as the light absorbing properties of pitch black metal, the dramatic increase in the metal’s surface area could open up new catalysis techniques.

Guo is currently looking at how to speed up the process (a finger-sized strip of metal takes 30 minutes) and experimenting with how different burst lengths, different wavelengths, and different intensities affect the metal’s properties.