You are here: Home › News › Bizarre Deep-Sea Communities Give Up Secrets
By Will Parker on November 21, 2006 in News 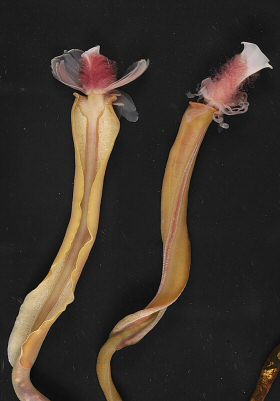 Cold seeps are areas of the seafloor where methane or hydrogen sulphide gas bubbles up from below. Like hydrothermal vents, cold seeps support unique, and sometimes bizarre, ecosystems. Animals like the tube worm (pictured), for example, live in symbiosis with microbes that can convert chemicals from the seep into living matter (“chemosynthesis”) without sunlight.

This expedition was the first to assess the biodiversity of the animal communities living at New Zealand’s cold seeps. “The seeps off New Zealand are remarkable in the sheer extent of their chemosynthetic communities,” said researcher Dr Amy Baco-Taylor.

Using a towed video and still camera system to identify seep organisms, the scientists captured footage of 30-40 cm (12-16 inch) long tube worms emerging from beneath limestone boulders and slabs lying at the core of the seeps. Around the rocks were patches of blackened sediment and pockets of white bacterial mats. Most sites also had extensive shell beds consisting of live and dead shells of various types of clams and mussels. These were fringed with stands of another type of deep-sea tube worm that is also gutless and relies on symbiotic bacteria for its nutrition. “We’ve collected samples of the animals living around the seeps for formal identification [and] there are several species new to science,” said co-researcher Dr Ashley Rowden.

The researchers suggest that cold seeps are very abundant along New Zealand’s eastern continental margin. However, this expedition also revealed the extent to which these communities may face serious threats from human activities. At all of the seep sites examined, there was evidence of fishing damage in the form of trawl marks, lost fishing gear, and areas of deep-sea coral rubble.

More from the seeps…
www.niwascience.co.nz