You are here: Home › News › Bipedal Reptile Fossil Predates Dinosaurs
By Will Parker on November 9, 2000 in News 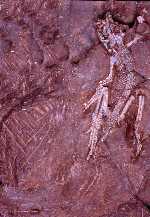 The oldest known fossil of an upright, bipedal reptile, which predates the age of the dinosaurs by at least 60 million years, has been discovered by an international team of scientists including two University of Toronto paleontologists.

“There are only a couple of times in evolutionary history when animals have gone from a sprawled posture like that of a four-legged lizard to an upright posture when they tuck their limbs under the body,” explains U of T at Mississauga paleontology professor Robert Reisz, one of the lead authors of a paper to be published in the Nov. 3 edition of Science. “It happened once in dinosaurs and again with mammals. So to find an example of an animal that did this before dinosaurs or mammals is particularly exciting.”

The 290-million-year-old specimen, which looks something like an upright lizard with forearms and a tail that more than doubles its body length, lived during the Permian period between 295 and 250 million years ago. Found in Germany in 1993, it is approximately 25 to 30 cm long and is preserved as a complete skeleton on a single slab of rock.

According to Reisz, this animal – formally known as Eudibamus cursoris – is a bolosaurid. This group of small reptiles died out near the end of the Permian period, which is marked by the largest extinction of life in the history of the Earth and is commonly recognized as the age before the dinosaurs.

“The bolosaurs proved to be a very interesting evolutionary experiment,” Reisz says. “It was thought that the ability to run on two legs and stand upright first emerged in dinosaurs and their relatives. But this discovery has shown interesting and exciting things happening in the evolutionary history of reptiles well before the advent of dinosaurs. Other work, some of it still in progress, supports this idea, and we now have strong evidence of the early evolution of herbivorous reptiles on land.”

This small reptile was also a herbivore and the researchers interpret its upright, bipedal ability as a mechanism for escaping predators, not becoming one as in the case of dinosaurs. “Since this bolosaur was able to tuck in its limbs under the body and run on two legs, it was basically faster than anything else around at the time. And for a small herbivorous animal that makes a lot of sense, especially when there are lots of larger predators around,” Reisz adds.

Fragments of other bolosaurs have been found in what is now North America, China and Russia, confirming the widespread early distribution of this reptile. What makes this find even more significant is that most of the reptiles that lived during the early Permian were characterized by massive girdles, short, stocky limbs, a sprawling posture and gait, and relatively slow locomotion.