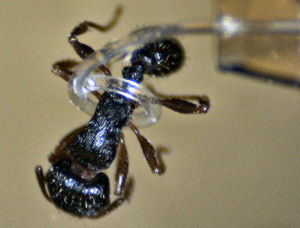 Using a transparent elastomer, Iowa State University scientists have created tiny tentacles that robots can wrap around delicate objects to handle them safely. The spiraling microrobotic tentacles are described in a research paper published in the journal Scientific Reports.

Demonstrating how one of the tentacles encircled an ant’s thorax, softly trapping the insect, lead researcher Jaeyoun Kim said; “most robots use two fingers and to pick things up they have to squeeze, but these tentacles wrap around very gently.” Kim’s development team believes the new micro-tentacle would be ideal for medical applications because they won’t damage tissues or blood vessels.

Their paper describes how they fabricated microtubes just one-third of an inch long and less than a hundredth of an inch wide. The tubes are made from PDMS, a transparent elastomer that can be a liquid or a soft, rubbery solid.

The researchers sealed one end of the tube and pumped air in and out. The air pressure and the microtube’s asymmetrical wall thickness created a circular bend. They further describe how they added a small lump of PDMS to the base of the tube to amplify the bend and create a two-turn spiraling, coiling action.

“Spiraling tentacles are widely utilized in nature for grabbing and squeezing objects,” Kim explained. “There have been continuous soft-robotic efforts to mimic them…, but the life-like, multi-turn spiraling motion has been reproduced only by centimeter-scale tentacles so far. [Previously] at millimeter and sub-millimeter scales, they could bend only up to a single turn.”

New photosynthesis-mimicking technology could enable round-the-clock solar power without batteries
Could our beliefs about human consciousness and the notion of self be completely wrong?