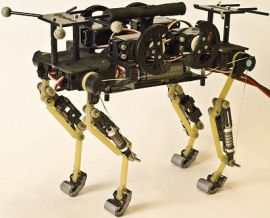 Writing about their work in the International Journal of Robotics Research, the researchers suggest that “cheetah-cub robots” like theirs could eventually be used in search and rescue missions or for exploration.

Co-inventor Alexander Sprowitz says the robot is the fastest of its type, with the ability to run nearly seven times its body length in one second. Although not as agile as a real cat, Sprowitz says the feline robot still has excellent auto-stabilization characteristics when running at full speed on uneven courses. “The robot is extremely light, compact, and robust and can be easily assembled from materials that are inexpensive and readily available,” he added.

Much of the innovation in the device is to be found in the design of its legs. The researchers developed the robotic legs using detailed observations of the feline leg. The number of segments – three on each leg – and their proportions are the same as that of a cat. Springs are used to reproduce tendons and electric actuators are used to replace the muscles.

“This morphology gives the robot the mechanical properties from which cats benefit, that’s to say a marked running ability and elasticity in the right spots, to ensure stability,” explained Sprowitz. “The robot is thus naturally more autonomous.”

While still in the experimental stages, the long-term goal of the researchers is to develop fast, agile, ground-hugging machines. “Studying and using the principles of the animal kingdom to develop new solutions for use in robots is the essence of our research,” said co-researcher Auke Ijspeert.