You are here: Home › Environment › News › Poop mining for precious metals may be viable, say sewage scientists
By Will Parker on March 23, 2015 in Environment, News 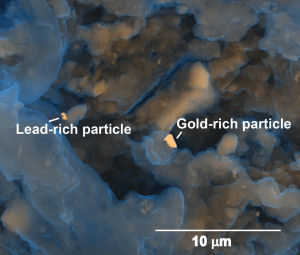 Poop could be a goldmine – literally. Surprisingly, human biosolids contain gold, silver, and other metals, as well as rare elements such as palladium and vanadium that are used in electronics and alloys. Now, researchers are looking at identifying the metals that are getting flushed and how they can be recovered.

In a paper presented at the 249th National Meeting & Exposition of the American Chemical Society, researcher Kathleen Smith explained that growing metals shortages could soon make sewage mining economically viable. “There are metals everywhere… If you can get rid of some of the nuisance metals that currently limit how much of these biosolids we can use on fields and forests, and at the same time recover valuable metals and other elements, that’s a win-win,” she said.

Smith and her team are on a mission to find out exactly what is in our waste. “We have a two-pronged approach,” she says. “In one part of the study, we are looking at removing some regulated metals from the biosolids that limit their use for land application. In the other part of the project, we’re interested in collecting valuable metals that could be sold, including some of the more technologically important metals, such as vanadium and copper that are in cell phones, computers and alloys.”

To do this, they are taking a page from the industrial mining operations’ method book and are experimenting with some of the same chemicals, called leachates, which this industry uses to pull metals out of rock. While some of these leachates have a bad reputation for damaging ecosystems when they leak or spill into the environment, Smith says that in a controlled setting, they could safely be used to recover metals in treated solid waste.

So far, her group has collected samples from small towns in the Rocky Mountains, rural communities and big cities. In the treated waste, the group has already started to discover metals like platinum, silver and gold. She states that they have observed microscopic-sized metal particles in biosolids using a scanning electron microscope. “The gold we found was at the level of a minimal mineral deposit,” she says, meaning that if that amount were in rock, it might be commercially viable to mine it.