You are here: Home › Environment › News › Bacteria make rain, bioprecipitation researchers say
By Will Parker on May 25, 2011 in Environment, News 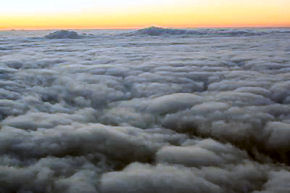 Bioprecipitation researchers say that most precipitation events could depend on a type of bacterium whose outer membrane binds water molecules in an ordered arrangement, thus providing a very efficient nucleating template which greatly enhances ice crystal formation.

The new evidence for airborne microorganisms influencing weather events was presented yesterday at the 111th General Meeting of the American Society for Microbiology in New Orleans. It adds to past research that speculated about precipitation and the role airborne bacteria might play.

“Bacteria have been found within the embryo, the first part of a hailstone to develop. The embryo is a snapshot of what was involved with the event that initiated growth of the hailstone,” said researcher Alexander Michaud, of Montana State University.

The research involved analyzing hailstones that were collected on the University campus after a storm in June 2010. The large hailstones were seperated into 4 layers and the meltwater from each layer was analyzed. The number of culturable bacteria was found to be highest in the inner cores of the hailstone.

“In order for precipitation to occur, a nucleating particle must be present to allow for aggregation of water molecules,” says Michaud. “There is growing evidence that these nuclei can be bacteria or other biological particles.”

A diverse range of particles are capable of serving as the nucleus, but the most efficient are those that are biological in origin, capable of catalyzing ice formations at temperatures near -2 degrees Celsius. The most well-studied is the plant pathogenPsuedomonas syringae.

Interestingly, aerosol-cloud simulation models imply that high concentrations of biological particles may not only influence the average concentration and size of ice crystals in clouds, but also horizontal cloud coverage in the free troposphere, precipitation levels at the ground and even insulation of the Earth from solar radiation.

“Evidence for the distribution of biological IN [ice nuclei] in the atmosphere coupled with the warm temperatures at which they function as IN has implied that biological IN may play a role in the Earth’s hydrological cycle and radiative balance,” concluded Christner.

Related:
Yes, It Does Always Rain On The Weekend
Change in monsoon patterns likely
Climatologists get to grips with aerosols
Is irrigation masking our warming climate?