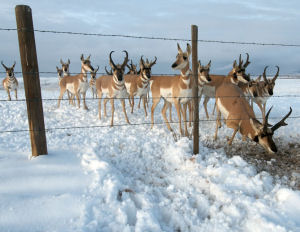 A general belief by conservationists that fences can help prevent the spread of diseases, protect wildlife from poachers, and help manage populations of threatened species has been overturned by a new study that shows fences are actually causing extinctions and destroying ecosystems.

The counterintuitive new findings, appearing in the journal Science, reviewed the pros and cons of large scale fencing for conservation and concluded that in nearly all cases, fencing should be a last resort.

The study notes how the desire to separate livestock from wildlife in order to create zones free from diseases such as foot and mouth has resulted in extensive fencing systems, particularly in southern Africa. Some of these fences have had devastating environmental effects, such as a disruptive impact on predator-prey dynamics. Species such as the African wild dog, for example, have learnt to chase their prey into fences for easy capture. For migratory herbivores such as elephants and wildebeest, fenced areas can limit access to the vast areas of land needed to support their populations.

Human-wildlife conflict is another issue that fencing is frequently used to tackle. However, a study of 37 fences in Southern India showed that almost 50 percent failed to prevent the passage of elephants, demonstrating the difficulty in designing and maintaining fences. As a barrier to people, fences can also spark hostility towards conservation efforts within local communities.

“In some parts of the world, fencing is part of the culture of wildlife conservation – it’s assumed that all wildlife areas have to be fenced. But fencing profoundly alters ecosystems, and can cause some species to disappear,” said Rosie Woodroffe, lead author of the study.

Woodroffe, from the Zoological Society of London, contends that the challenges of appropriate fence design, location, construction, and maintenance mean that fences often fail to deliver the anticipated benefits. Ironically, in some places, fences also provide poachers with a ready supply of wire for making snares.

The researchers conclude that as climate change increases the importance of facilitating wildlife mobility and maintaining landscape connectivity, fence removal may become an important form of climate change preparedness, and so fencing of wildlife should be avoided whenever possible.

“An increased awareness of the damage caused by fencing is leading to movements to remove fences instead of building more. Increasingly, fencing is seen as backwards step in conservation,” concluded study co-author Sarah Durant, also of the Zoological Society.