You are here: Home › News › Space › New analysis reveals hidden planetary disks
By Will Parker on April 25, 2014 in News, Space 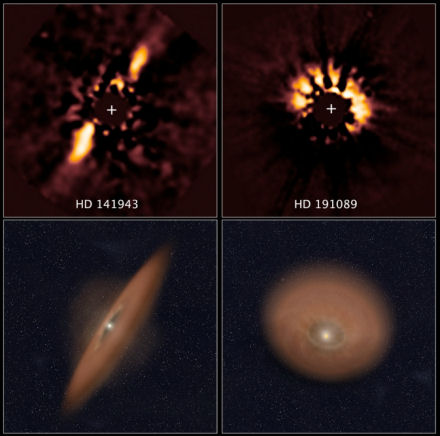 The two images at top reveal debris disks around young stars uncovered in archival images taken by NASA’s Hubble Space Telescope. The illustration beneath each image depicts the orientation of the debris disks.
Using a new image processing technique, astronomers combing through data from the Hubble Space Telescope have identified five planetary disks around young stars much like our Sun. The disks, say the astronomers, are telltale evidence of newly formed planets.

The stars in question were initially targeted by Hubble after unusual heat signatures were obtained from NASA’s Spitzer Space Telescope and the Infrared Astronomical Satellite back in 1983. That data provided interesting clues that dusty disks could exist around these stars. Small dust particles in the disks might scatter light and therefore make the disks visible. But when Hubble first viewed the stars between 1999 and 2006, no disks were detected in the pictures.

Remi Soummer, of the Space Telescope Science Institute, who led the team that made the discovery, said that using new processing techniques on Hubble’s archival data was the key to discovering the debris disks.

“These findings increase the number of debris disks seen in scattered light from 18 to 23. By significantly adding to the known population and by showing the variety of shapes in these new disks, Hubble can help astronomers learn more about how planetary systems form and evolve,” said Soummer.

The dust in the disks is hypothesized to be produced by collisions between small planetary bodies such as asteroids. The debris disks are composed of dust particles formed from these grinding collisions. Earth’s moon and the satellite system around Pluto are considered to be collision byproducts.

“One star that is particularly interesting is HD 141943,” said team member Christine Chen. “It is an exact twin of our sun during the epoch of terrestrial planet formation in our own solar system.”

Hubble found the star exhibits an asymmetrical, edge-on disk. This asymmetry could be evidence the disk is being gravitationally sculpted by the tug of one or more unseen planets.