You are here: Home › News › Space › Newly discovered dwarf planet hints at a much larger not-yet-seen planet
By Will Parker on March 27, 2014 in News, Space 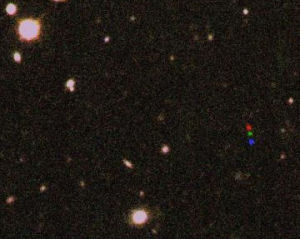 2012 VP113, a newly discovered dwarf planet (pictured) in the distant Oort cloud region of our Solar System indicates the potential presence of an enormous as yet undiscovered planet, perhaps up to 10 times the size of Earth. Details of the discovery of 2012 VP113 and its intriguing orbital characteristics appear in Nature.

Our Solar System can be divided into three parts: the rocky planets like Earth, which are close to the Sun; the gas giant planets, which are further out; and the frozen objects of the Kuiper belt, which lie just beyond Neptune’s orbit.

Beyond this, there appears to be an edge to the Solar System where only one largish object, Sedna, was previously known to exist. But the newly found 2012 VP113 has an orbit that stays even beyond Sedna. 2012 VP113’s closest orbit point to the Sun brings it to about 80 times the distance of the Earth from the Sun, a measurement referred to as 80 AU. Sedna is not quite as distant at around 76 AU for its closest approach. 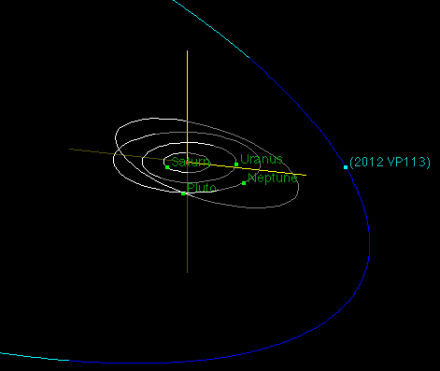 Astronomers Scott Sheppard and Chadwick Trujillo of the Gemini Observatory used the new Dark Energy Camera (DECam) on the NOAO 4 meter telescope in Chile to make the discovery. DECam has the largest field-of-view of any 4-meter or larger telescope, giving it unprecedented ability to search large areas of sky for faint objects. The Magellan 6.5-meter telescope at Carnegie’s Las Campanas Observatory was used to determine the orbit of 2012 VP113 and obtain information about its surface properties.

Sheppard and Trujillo believe that about 900 objects with orbits like Sedna and 2012 VP113 with sizes larger than 1000 km may exist and that the total population of the inner Oort cloud is likely bigger than that of the Kuiper Belt and main asteroid belt.

They speculate that the similarity in the orbits for Sedna and 2012 VP113 suggests that an unknown massive perturbing body may be shepherding these objects into these similar orbital configurations. They believe that a “Super Earth” or an even larger object at hundreds of AU could create the effect seen in the orbits of these objects.

Work by celestial archaeologists hints at Earth’s ultimate fate
Breast lifts: the only way is up