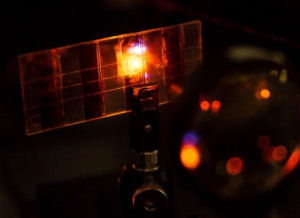 Scientists from Nanyang Technological University in Singapore have developed a photovoltaic material which, as well converting light to electricity, can also emit light too. According to the researchers, this new type of solar cell could be used to make display screens that also function as solar panels.

The cell was developed using perovskite, a material being investigated for creating high-efficiency, inexpensive solar cells. The discovery of its light emitting capabilities happened almost by accident, when researcher Xing Guichuan shone a laser on the perovskite cell. To the research team’s surprise, the solar cell glowed brightly. This is a significant finding as most solar cell materials are effective at absorbing light, not generating light.

“What we have discovered is that it can capture light particles and convert them to electricity, or vice versa,” said team member Sum Tze Chien. “By tuning the composition of the material, we can make it emit a wide range of colors, which also makes it suitable as a light emitting device, such as flat screen displays.”

His research partner, Nripan Mathews, said this newly discovered property is expected to enable industry to adopt the material for use in existing technology. “What we have now is a solar cell material that can be made semi-translucent. It can be used as tinted glass to replace current windows, yet it is able to generate electricity from sunlight. The fact that it can also emit light makes it useful as light decorations or displays for the facades of shopping malls and offices,” he suggests.

Reporting their work in the journal Nature Materials, the researchers claim the perovskite solar cell is five times cheaper than current silicon-based solar cells. This, they say, is due to its easy solution-based manufacturing process which works at room temperature.