You are here: Home › Animal Kingdom › News › Camouflage or bright colors? What’s better to live long and prosper?
By Will Parker on March 10, 2014 in Animal Kingdom, News 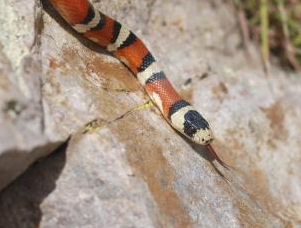 In nature, bright colors are signals that scream, “Don’t eat me!” But how did prey species evolve these characteristics? Now, thanks to a computer simulation of evolving populations of organisms, evolutionary scientists think they know the answer.

In the journal PLOS ONE, researchers at Michigan State University reveal that these color-coded communications evolve over time through gradual steps. Equally interesting, the scientists show how drab-colored, oft-eaten prey adopt garish colors – even though they aren’t poisonous.

“In some cases, nonpoisonous prey gave up their protection of camouflage and acquired bright colors,” said Kenna Lehmann, who conducted the research. “How did these imitators get past that tricky middle ground, where they can be easily seen, but they don’t quite resemble colorful toxic prey? And why take the risk?”

But why don’t all prey have these characteristics, and why don’t the imitators evolve to develop poison instead? “Leaving the safety of the cryptic, camouflage peak to go through the exposed adaptive valley over many generations is a dangerous journey,” Lehmann explained. “To take the risk of traversing the dangerous middle ground – where they don’t look enough like toxic prey – is too great in many cases. Toxins can be costly to produce. If prey gain protection by colors alone, then it doesn’t make evolutionary sense to expend additional energy developing the poison.”