You are here: Home › Animal Kingdom › News › Bee thrill-seekers reveal evolutionary importance of novelty
By Will Parker on March 9, 2012 in Animal Kingdom, News 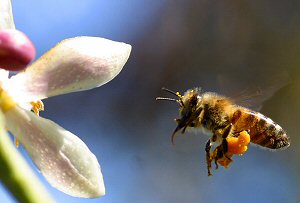 When a colony of bees outgrows its living quarters, the hive divides and the swarm must find a suitable new home. At this moment, a few intrepid bees – less than 5 percent of the swarm – take off to hunt for a hive. These bees, called nest scouts, are on average 3.4 times more likely than their peers to also become food scouts. This is important, Robinson adds, because “if you show the same tendency in different contexts, then that can be called a personality trait.”

“People are trying to understand the basis of novelty-seeking behavior in humans and in animals,” Robinson explained. “And a lot of the thinking has to do with the relationship between how the [brain’s] reward system is engaged in response to some experience.”

The researchers found thousands of distinct differences in gene activity in the brains of scouting and non-scouting bees. “We expected to find some, but the magnitude of the differences was surprising given that both scouts and non-scouts are foragers,” Robinson said.

The results indicate that novelty-seeking in humans and other vertebrates has parallels in an insect. They also suggest that insects, humans and other animals make use of the same genetic “toolkit” in the evolution of behavior. “It looks like the same molecular pathways have been engaged repeatedly in evolution to give rise to individual differences in novelty-seeking,” Robinson concluded.