You are here: Home › Medicine › News › Tramadol painkiller found in nature
By Will Parker on September 29, 2013 in Medicine, News 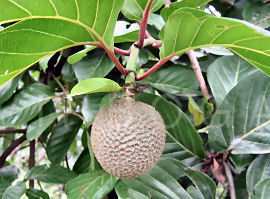 De Waard said the researchers were able to isolate the components in the plant that were responsible for the presumed analgesic effects by analyzing the root bark. “The biggest surprise in this study was the fact that this molecule was a known one,” he explained. “It was identical to Tramadol, a synthetic medication developed in the seventies. This medication is used world-wide, because although it is a derivative of morphine, it has fewer side effects than morphine, in particular addiction problems.”

In order to confirm their results, the researchers tested different processes with the aim of proving that the substance discovered was of natural origin. Their analyses were confirmed by three independent laboratories. “All results converge and confirm the presence of Tramadol in the root bark of Nauclea latifolia. On the other hand, no trace of this molecule was detected in the aerial part of the shrub [leaves, trunk or branches],” De Waard said.

The study reports that the concentration of Tramadol in the dried bark extracts was measured at 0.4 percent and 3.9 percent. “These are extremely high levels of active substance,” noted De Waard.