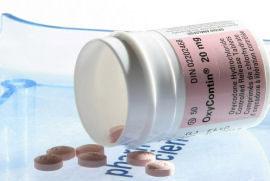 For the study, Alexander and his co-researchers used data from U.S. doctors’ office visits to analyze trends in pain medications prescribed from 2000 to 2010. The study focused on trends in the use of strong opioid pain medications for non-cancer pain.

The results showed no significant change in the proportion of doctor’s office visits with pain. Throughout the decade, pain was consistently reported by patients or diagnosed by doctors at about one-fifth of visits. There was no change in the proportion of pain visits treated with over-the-counter pain relievers. However, there was a significant increase in prescriptions for opioid medications. The rate of opioid prescribing for pain visits increased from 11 percent in 2000 to 20 percent in 2010.

After adjustment for other factors, there were few patient, physician, or practice characteristics related to higher or lower rates of opioid use for non-cancer pain. Rather, “increases in opioid prescribing generally occurred non-selectively over time,” Alexander noted.

He added that the rise can also be seen in the consistent increases in emergency department visits and deaths from prescription opioid abuse. “By 2008, the annual number of fatal drug poisonings surpassed those of motor vehicle deaths and overdose deaths attributable to prescription drugs exceeded those of cocaine and heroin combined,” Alexander said.

The results, he suggests, show that efforts to improve the identification and treatment of pain may have backfired, due to an over-reliance on prescription opioids. “Policy-makers, professional organizations, and providers should re-evaluate prior efforts to improve the identification, treatment and management of non-malignant pain and promote approaches that adequately reflect the importance of nonopioid and non-pharmacologic treatments,” he concluded.