You are here: Home › News › Space › Inflatable antennae give micro-satellites long-range comms
By Will Parker on September 8, 2013 in News, Space 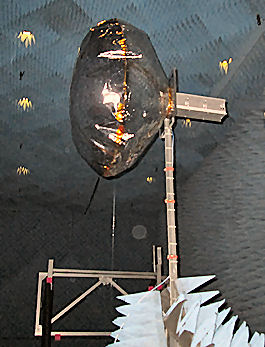 The shoebox-sized satellites known as CubeSats are making space exploration cheaper and more accessible, but their size-restricted antennae have limited their communication range to below that of most geosynchronous satellites, severely limiting the types of mission they can undertake.

That may be about to change, however, now that researchers at MIT have come up with an inflatable antenna design that would allow CubeSats to travel much further in the solar system.

Inflatable antennae are not a new idea. Previous experiments in space have successfully tested such designs, though mostly for large satellites. To inflate these bulkier antennae, engineers install a system of pressure valves to fill them with air once in space – heavy, cumbersome equipment that would not fit within a CubeSat’s limited real estate.

The new inflation mechanism devised by MIT researchers is based on sublimating powder, a chemical compound that transforms from a solid powder to a gas when exposed to low pressure. “It’s almost like magic,” MIT’s Alessandra Babuscia said. “Once you are in space, the difference in pressure triggers a chemical reaction that makes the powder sublimate from the solid state to the gas state, and that inflates the antenna.”

Babuscia and her colleagues built two prototype antennae, each a meter wide, out of Mylar; one resembled a cone and the other a cylinder when inflated. They determined an optimal folding configuration for each design, and packed each antenna into a 10-cubic-centimeter space within a CubeSat, along with a few grams of benzoic acid, a type of sublimating powder. The team tested each antenna’s inflation in a vacuum chamber, lowering the pressure to just above that experienced in space. In response, the powder converted to a gas, inflating both antennae to the desired shape.

The group also tested each antenna’s electromagnetic properties – an indication of how well an antenna can transmit data. In radiation simulations of both the conical and cylindrical designs, the researchers observed that the cylindrical antenna performed slightly better, transmitting data 10 times faster, and seven times farther, than existing CubeSat antennae.

Babuscia said the use of sublimating powder can help circumvent another problem: micrometeroid impacts. She explains that a sublimating powder will only create as much gas as needed to fully inflate an antenna, leaving residual powder to sublimate later, to compensate for any later leaks or punctures.

The group tested this theory in a simulation, modeling the inflatable antenna’s behavior with different frequency of impacts to assess how much of an antenna’s surface may be punctured without compromising its performance. The researchers found that the lifetime of a CubeSat’s inflatable antenna may be several years, even if it is riddled with small holes.

“With this antenna you could transmit from the moon, and even farther than that,” said Babuscia. “This antenna is one of the cheapest and most economical solutions to the problem of [CubeSat] communications.”

Related:
Discuss this article in our forum
Satellites Open To Amateur Attack
Where Do Rusty Rockets Go When They Die?
GPS location systems under increasing attack