You are here: Home › Medicine › News › Braille patterns transmitted directly to retina
By Will Parker on November 23, 2012 in Medicine, News

For the first time scientists have wirelessly streamed Braille patterns directly into a blind patient’s retina, allowing the patient to read words accurately and quickly. The device uses a small camera mounted on a pair of glasses, a portable processor to translate the image from the camera into electrical signals, and a microchip with electrodes implanted directly on the retina (pictured below). Before being transmitted to the eye, the image of the text is processed by text-to-Braille recognition software. The device was developed by Second Sight Medical Products and the results from tests with a single blind patient are reported in Frontiers in Neuroprosthetics. 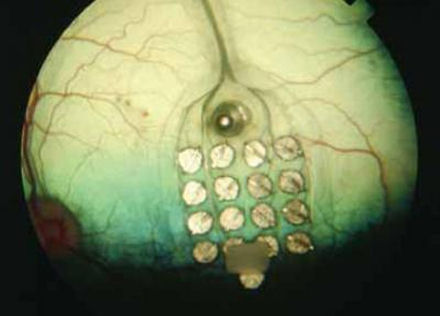 Similar in concept to cochlear implants, the visual implant uses a grid of 60 electrodes to stimulate patterns directly onto the nerve cells of the retina. For the study, the researchers used a computer to stimulate six of these points on the grid to project the Braille letters. A series of tests were conducted with single letters as well as words ranging in length from two letters up to four. The patient was shown each letter for half a second and achieved around 80 percent accuracy for short words. “Instead of feeling the Braille on the tips of his fingers, the patient could see the patterns we projected and then read individual letters in less than a second with up to 89 percent accuracy,” explained researcher Thomas Lauritzen, lead author of the paper. The results, he says, show that the patient could easily distinguish between signals on different, individual electrodes.