Thinning of the largest icefields in the southern hemisphere (excluding Antarctica) has accelerated sharply, with a new study showing Patagonian glaciers are losing ice faster than ever before. The collaborative study, penned by scientists from Cornell University and the Center for Scientific Studies in Chile, appears in Geophysical Research Letters.

Earlier studies determined that between the 1970’s and 2000 both the Northern and Southern icefields, which feed into surrounding oceans as they melt, together raised global sea levels by an average of 0.042 millimeters each year. Since 2000, Cornell’s Michael Willis, lead author of the study, found that number increased to 0.067 mm of sea level rise on average per year (about two percent of global annual sea level rise).

The Southern Icefield, which Willis and his colleagues focused on, loses around 20 billion tons (gigatonnes) of ice each year. Cumulatively, the Southern Patagonian Icefield has lost enough water over the last 12 years to cover the entire United States with 2.7 centimeters (1 inch) of water. Including the melting of both icefields, and the amount increases to 3.3 centimeters (1.2 inches), the scientists report. 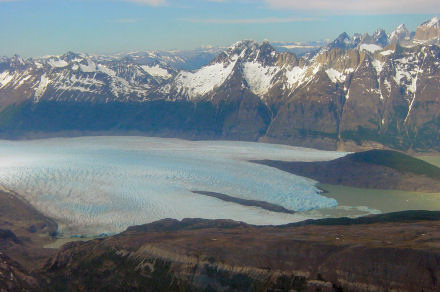 “Using ASTER, we think that we have a good idea of where things are changing. But with GRACE we get a good idea of when things are changing. So we have this powerful hybrid,” Willis explained. From this, the scientists identified individual glaciers and how much each has thinned since 2000. On average, the Southern Patagonian Icefield glaciers have thinned by about 1.8 meters (5.9 feet) per year (the thinning can be seen in the above picture where the treeline indicates the past ice level).

“We find some glaciers are stagnant and even that some have advanced slightly but on the whole, retreat and thinning is prevalent,” Willis said. “Interestingly, we see thinning occurring up to the highest elevations, where presumably it is coldest.”

Warming air temperatures contribute to the thinning at the highest and coldest regions of the ice field, Willis explained. Moreover warmer temperatures mean greater chances that rain, as opposed to snow, will fall on and around the glaciers. This double threat of warming and more rain may, in turn, change the amount of water beneath the glaciers. More water means less friction, so the glaciers start to move faster as they thin, moving even more ice in to the oceans. Rising lakes at the front of the glaciers may also play a part as they eat away at the icy edges faster, causing the glaciers to retreat even further.

“Patagonia is kind of a poster child for rapidly changing glacier systems,” noted Willis. “We are characterizing a region that is supplying water to sea level at a big rate, compared to its size.”