You are here: Home › News › Glacial Acceleration Linked To “Plumbing” Issues
By Will Parker on January 16, 2008 in News 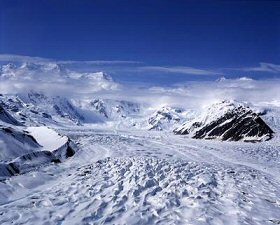 A University of Colorado at Boulder study indicates meltwater periodically overwhelms the interior drainpipes of Alaska’s Kennicott Glacier, causing it to lurch forward. Similar processes may be behind the acceleration of glaciers observed recently on the Greenland ice sheet, write the researchers in Nature Geoscience.

“The phenomenon is similar to the plumbing system of a house that is incapable of handling excess water or waste, causing it to back up,” said Anderson. “This is a feedback we are still trying to understand and one that has big implications for understanding the dynamics of glaciers and ice sheets, including the behavior of outlet glaciers on the Greenland ice sheet.”

The sliding eventually halts when the moving glacier opens up spaces in its bed that can accommodate some of the excess water, helping to relieve the water pressure, the authors said. In addition, high rates of water flow eventually enlarge the conduits and ducts permeating the glacier; “melting them back and allowing more water to bleed from the system, further decreasing the pressure,” explained Anderson.

An awareness of such glacial dynamics is useful for glaciologists studying the Greenland ice sheet, which is undergoing record surface melt and the subsequent drainage of large volumes of water through the ice sheet and associated outlet glaciers. Some of Greenland’s outlet glaciers have sped up from 50 percent to 100 percent during the annual melt season and discharged substantially more ice into the seas, according to recent research led by CU-Boulder glaciologist Konrad Steffen.

“There are a number of catastrophic draining events of slush ponds on the Greenland ice sheet that may well promote increased sliding of the ice sheet as this water is jammed into a sub-glacial pipe system that is ill-prepared for such inputs,” Anderson noted. “This phenomenon is also relevant to small glaciers around the world, because it may help to explain their nonsteady rates of sliding.”

“People are becoming increasingly aware that sea-level rise is a very real problem. As scientists, we need to acknowledge the role of all of the world’s ice masses and to understand the physical mechanisms by which they deliver water to the sea,” Anderson concluded.