You are here: Home › News › Prehistory › Double whammy dinosaur extinction theory
By Will Parker on September 6, 2012 in News, Prehistory 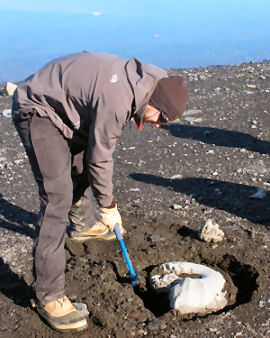 University of Washington researchers say they have evidence that shows by the time of the asteroid impact, life on the seafloor – mostly species of clams and snails – was already perishing because of the effects of huge volcanic eruptions on the Deccan Plateau in what is now India.

“The eruptions started 300,000 to 200,000 years before the impact, and they may have lasted 100,000 years,” said researcher Thomas Tobin (pictured). “The eruptions would have filled the atmosphere with fine particles [aerosols] that initially cooled the planet but, more importantly, they also would have spewed carbon dioxide and other greenhouse gases to produce long-term warming that led to the first of the two mass extinctions. The aerosols are active on a year to 10-year time scale, while the carbon dioxide has effects on a scale of hundreds to tens of thousands of years.”

Tobin contends that during the earlier extinction it was primarily life on the ocean floor that died, in contrast to the later extinction triggered by the asteroid impact, which appeared to kill many more free-swimming species. “The species in the first event are extinct but the groups are all recognizable things you could find around on a beach today,” he said.

Tobin’s paper, in the journal Palaeogeography, Palaeoclimatology, Palaeoecology, documents results of research conducted in a fossil-rich area on Seymour Island, off the Antarctic Peninsula. The region has very thick sediment deposits and, for a given interval of time, might contain 10 times more sediment as the well-known Hell Creek Formation in Montana. This means scientists have much greater detail as they try to determine what was happening at the time.

Tobin and his co-researchers took small surface core samples from rocks and fossils in the Antarctic sediment and used a method called magnetostratigraphy, employing known changes over time in Earth’s magnetic field to determine when the fossils were deposited. The thicker sediment allowed dating to be done more precisely.

“I think the evidence we have from this location is indicative of two separate events, and also indicates that warming took place,” Tobin said. While there is as yet no direct evidence that the first extinction event had any effect on the second, Tobin believes it is possible that surviving species from the first event were compromised enough that they were unable to survive the long-term environmental effects of the asteroid impact. “It seems improbable to me that they are completely independent events,” he said.