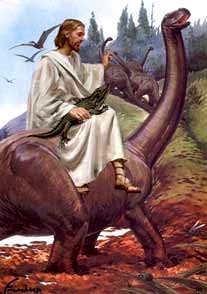 While most of us now accept that Jesus didn't spread the word from town to town perched atop a dinosaur's back, researchers from the paleontology department at the University of California (UC), Berkeley, believe that our understanding of dinosaur lineage is flawed. Dinosaurs, they say, actually lived alongside their ancestors for tens of millions of years. But the possibilities for paleontological revision don't end there, as UC Berkeley researchers have also cleared the way for yet more possibilities (as if we needed any more) as to how the dino dynasty mysteriously, and abruptly ended.

The term "dinosaurs" came from English paleontologist Richard Owen, who in 1842 identified a distinct sub-order saurian reptiles. It's derived from the Greek words deinos and saura, meaning "terrible"/"fearsome" and "reptile"/"lizard" respectively, which is probably why children absolutely adore them.

While dinosaurs were a many and varied species, a long list of shared features have been documented; including a long, S-shaped neck, an elongated shoulder blade, and hind limbs longer than the fore limbs. They also had what is referred to as a perforate (or open) hip joint that allowed them to stand erect in a similar fashion to modern mammals. Past research suggested that the very first dinosaurs (the Eoraptor genus) that split from their archosaur ancestors during the Triassic were savage little bipedal predators. But both this hypothesis and the notion that dino-precursors didn't coexist with dinosaurs for an extended period have recently been challenged.

Current thinking has it that at that point in dino-evolution, the now obsolete non-dinosaur ancestors were swiftly, and mercilessly replaced by the dinosaurs, who went on to dominate and exploit every nook of their environment. "Paleontologists thought that dinosaur precursors disappeared long before the dinosaurs appeared, that their ancestors probably were out-competed and replaced by dinosaurs and didn't survive," explains Kevin Padian, professor of integrative biology at UC Berkeley. But in a new study published in Science magazine, Padian goes on to explain that there is evidence to suggest that this was not the case at all, and that dinosaur precursors and dinosaurs lived together for millions of years. "The evidence shows that they may have coexisted for 15 or 20 million years or more," says Padian, who co-authored the study with graduate students Randall Irmis and Sterling Nesbitt.

The Berkeley team's study is based on a dig conducted at Hayden Quarry, Northern Mexico. There, they found a rich source of fossils that would not only spur along dinosaur research generally, but would show that dinosaurs and their non-dinosaur precursors coexisted for a previously unrecognized extended period. Altogether, the team found over 1,300 fossil specimens, comprised of complete and partial bones. "I have spent summers doing field work at the Petrified Forest National Park, which has rocks of the same age," recalled Irmis, "and we were lucky to find half-a-dozen dinosaur bones in an entire season. So, we knew this was a really special site."

Prior to the Hayden Quarry discovery, evidence for non-dinosaur ancestors, or dinosaurs, in the Late Triassic was scarce. To give this some kind of context, the first Late Triassic precursor dinosaur - a creature called a Silesaurus - was only discovered in Poland in 2003.

But now, the Berkeley study team has added two more dino-precursors to the collection. Their discoveries include Dromomeron romeri, and another as yet unnamed quadrupedal, beaked grazer about three times the size of Dromomeron and similar to Silesaurus. But what is of most interest to the team is the fact that they also found dinosaur remains - including bones from the carnivorous Chindesaurus bryansmalli, and an ancestor of a well-known Triassic dinosaur, the carnivorous Coelophysis - at the Hayden Quarry site, which appears to be unambiguous evidence for coexistence. "Finding dinosaur precursors, or basal dinosauromorphs, together with dinosaurs tells us something about the pace of changeover," says Irmis. "If there was any competition between the precursors and dinosaurs, then it was a very prolonged competition."

With the discovery of the Silesaurus-like dino-precursor, the team has shown that, in fact, not all dinosaur ancestors were tiny bipeds. "Everyone thought that all the dinosaur precursors were little carnivorous, bipedal animals," says Irmis. "This Silesaurus-like creature still has the gestalt of a dinosaur, but to find a quadrupedal, herbivorous one was kind of unexpected." This may indicate that non-dinosaur precursors stuck around a lot longer than previously thought, and evolved alongside their dinosaur descendants. 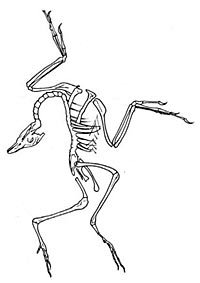 The researchers have also been revisiting evidence that might help us understand how the dinosaur dynasty came to its sudden end. There's certainly no shortage of dinosaur extinction theories; from the plausible to the downright wacky. A massive asteroid, multiple object impacts (courtesy of the Oort cloud), climate change, super-volcanoes, and aliens (of course), have all been proposed as culprits for dinosaur extinction (personally, I think Elvis went back in time and indulged in too many bronto-burgers). Now, however, UC Berkeley's Padian may have both narrowed the field of existing theories, and also opened up a few new ones.

It's well-known in paleontologist circles that many fossilized dinosaurs are found in a peculiar arched, open mouthed, head tossed back looking pose. One example of this bizarre contorted posture is the 150 million year old Archaeopteryx, which is best known for being the link between birds and dinosaurs. "Virtually all articulated specimens of Archaeopteryx are in this posture, exhibiting a classic pose of head thrown back, jaws open, back and tail reflexed backward and limbs contracted," says Padian. This leads one to think that dinosaurs either laughed themselves to death, or, they died an agonizing death of which we still know little about. Until now, the theory was that the pose struck by these dinosaurs was a result of their remains being shifted by the tidal forces of rivers and the like. But neither Padian nor his associate Cynthia Marshall Faux, of the Museum of the Rockies (and former veterinarian), give this theory much credence.

"I'm reading this in the literature and thinking, 'This doesn't make any sense to me as a veterinarian,'" says Faux. "Paleontologists aren't around sick and dying animals the way a veterinarian is, where you see this posture all the time in disease processes, in strychnine cases, in animals hit by a car or in some sort of extremis." Faux says that the agonized poses in which dinosaurs have classically been found are consistent with asphyxiation, poisoning, or some kind of disease like meningitis. She adds that her experiments have discounted drying or rigor mortis as being responsible for the pose.

Padian and Faux say their findings point to possible new ways that microbes or other environmental factors like algal blooms could suffocate animals. The duo's findings also raise questions as to whether dinosaurs did in fact become rapidly extinct, or whether separate extinction events occurred in different regions. Padian and Faux suggest that "reevaluation may be in order for an untold number of paleoenvironments whose story has been at least partly explained on the basis of the death positions of many of their fossil vertebrates." Whatever the case, both studies should lead to a better understanding of both the rise and fall of these fascinating creatures.