You are here: Home › Climate Change › News › Bowerbirds gardening for pleasure
By Will Parker on April 24, 2012 in Climate Change, News 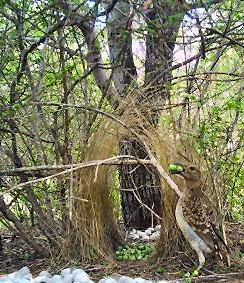 The researchers found that, like farmers selecting for fatter pigs or larger seeds, the bird’s behavior may lead to a change in the appearance of fruits. The fruits from plants close to the bowers were slightly greener in color than those found on other plants. The researchers tested the males’ choices and found they preferred this color to that of the other fruit.

“Until now, humans have been the only species known to cultivate plants for uses other than food. We grow plants for all kinds of things – from drugs, to clothing, to props that we use in our sexual displays such as roses – but it seems we are not unique in this respect,” noted lead researcher Joah Madden, from Exeter University. “This accumulation of preferred objects close to a site of habitation is arguably the way any cultivation begins. It will be very interesting to see how this mutually-beneficial relationship between bowerbirds and these plants develops.”