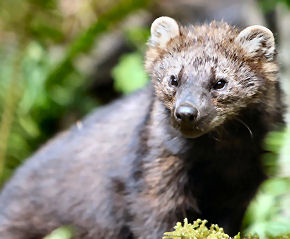 Poisons used on illegal marijuana farms appear to be sickening and killing the fisher (pictured), a rare forest carnivore that makes its home in some of the most remote areas of California. Fishers are currently a candidate species for listing under the United States Endangered Species Act.

The researchers, led by veterinary scientists from the University of California, Davis, say they detected commercial rodenticide in dead fishers in Humboldt County near Redwood National Park and in the southern Sierra Nevada in and around Yosemite National Park.

The scientists have pointed the finger at illegal marijuana farms as the likely source, noting that marijuana growers often apply the poisons to deter a wide range of animals from encroaching on their crops. Writing about their findings in the journal PLoS ONE, the researchers say that other species such as martens, owls, and red foxes are also threatened.

According to the study’s lead author Mourad Gabriel, the fishers likely become exposed to the rat poison when eating animals that have ingested it. The fishers also may consume rodenticides directly, drawn by the bacon, cheese and peanut butter flavorizers that manufacturers add to the poisons. “Our findings were very surprising since non-target poisoning from these chemicals is typically seen in wildlife in urban or agricultural settings,” Gabriel explains. “In California, fishers inhabit mature forests within the national forest, national parks, private industrial and tribal community lands – nowhere near urban or agricultural areas.”

Tellingly, 79 percent of the fisher carcasses examined had been exposed to anticoagulant rodenticides and of those, nearly all had been exposed to the second-generation rodenticide Brodifacoum. Gabriel said second-generation rodenticides can be lethal after a single ingestion but it can take up to seven days before clinical signs appear, so the poisoned animal is a significant risk to predators for several days before it dies.

Exposure to the poison was high throughout the fisher populations studied, complicating efforts to pinpoint direct sources. The fishers, many of which had been radio-tracked throughout their lives, did not wander into urban or agricultural environments. However, their habitat did overlap with illegal marijuana farms.

The study notes that fishers are an “umbrella” species for other forest carnivores. “If fishers are at risk, these other species are most likely at risk because they share the same prey and the same habitat,” Gabriel explained. “Our next steps are to examine whether toxicants used at illegal marijuana grow sites on public lands are also indirectly impacting fisher populations and other forest carnivores through prey depletion.”