You are here: Home › News › Space › US astronomers give nod to complex organics in space
By Will Parker on November 3, 2011 in News, Space 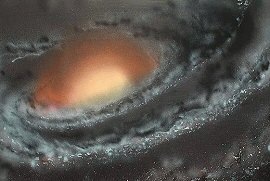 The controversial notion that complex organic molecules could be relatively common in interstellar space has garnered support from US and European astronomers’ new observations of a series of diffuse interstellar bands that were first recorded 90 years ago. The new findings, published in Nature, are the work of Donald Figer, of the Rochester Institute of Technology, Paco Najarro, from the Center of Astrobiology in Madrid and Thomas Geballe, from the Gemini Observatory in Hawaii.

Importantly, the 13 newly identified lines do not match predicted lines of simple molecules and cannot be pinned to a single carbon-based organic molecule. And it seems that these mysterious molecules may be relatively common. “We saw the same absorption lines in the spectra of every star,” Figer says. This means that the material responsible for these DIBs “survives” under different physical conditions of temperature and density.

“None of the diffuse interstellar bands has been convincingly identified with a specific element or molecule, and indeed their identification, individually and collectively, is one of the greatest challenges in astronomical spectroscopy,” concluded Geballe.