You are here: Home › News › Space › First images from ALMA radio telescope
By Will Parker on October 4, 2011 in News, Space 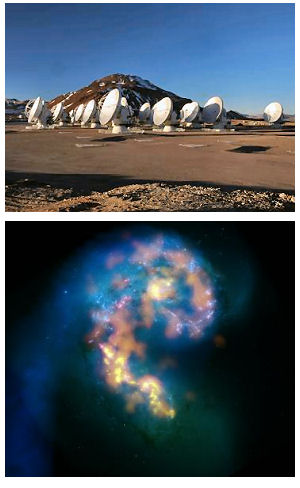 The world’s most complex ground-based astronomy observatory, the Atacama Large Millimeter/submillimeter Array (ALMA) in northern Chile, has captured its first image – a pair of colliding galaxies. The detailed view of the merging Antennae Galaxies confirms that the ALMA array – which is still only one-third complete – will eventually allow astronomers to explore some of the farthest and most hidden corners of the Cosmos.

“With millimeter and submillimeter waves, we can watch planet formation, investigate astrochemistry, and detect the light that is finally reaching us from the Universe’s earliest galaxies. ALMA’s first projects will flex the telescope’s capabilities in all of these fields and many, many more,” said Dr. Alison Peck, ALMA Deputy Project Scientist.

Peck explained that the Antennae galaxies were chosen as the test subject because they are in the process of undergoing the type of spectacular, violent merger that many galaxies may have undergone since their formation, but that astronomers have rarely caught in action. She compares the image to that of an ultrasound of an expectant mother’s womb, revealing hidden starbirth nestled inside otherwise obscuring dust clouds.

“The collision of these two galaxies has turned them into an impressive star-making factory. With Hubble, we’ve seen the formation of thousands of massive super star clusters, each with thousands or even millions of young stars in them,” added ALMA aficionado, Dr. Brad Whitmore. “With ALMA, we will focus on the heart of the collision, the interaction region where the two galaxies are crashing together. We can then study the formation of the Antennae’s most impressive fireworks and look into the cores of the giant molecular clouds where the star clusters are born.”

During these first observations, ALMA will continue its construction phase in the Chilean Andes, high on the remote Chajnantor Plain in the harsh Atacama Desert. By 2013, ALMA will be complete with 66 dishes, but these first images have been produced with only one-third that number. Each new, climate-armored telescope will join the array and be linked via fiber optic cabling. The views from each distant telescope are assembled into one large view by one of the world’s fastest, special-purpose supercomputers, the ALMA Correlator. Designed and built by the National Radio Astronomy Observatory Technology Center in Charlottesville, Virginia, the ALMA Correlator performs 17 quadrillion operations per second.