You are here: Home › News › Space › Hubble snaps most distant galaxy yet
By Will Parker on January 27, 2011 in News, Space 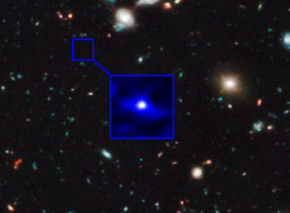 Astronomers have pushed the Hubble Space Telescope to it limits by finding what they believe to be the most distant object ever seen in the universe – a mini-galaxy at a distance of 13.2 billion light years that formed only 480 million years after the Big Bang. Writing about their observations in Nature, the team said the dim object is a compact galaxy made of blue stars. It is relatively small and more than one hundred such mini galaxies would be needed to make up our Milky Way.

While they are thrilled to have discovered the galaxy, the astronomers are surprised to have found only one. Previous searches had found 47 galaxies at somewhat later times, when the universe was about 650 million years old. The rate of star birth therefore increased by about ten times in the interval from 480 million years to 650 million years. The article notes that this an astonishing increase over such a short period, happening in just 1 percent of the age of the universe.

Scientists don’t know exactly when the first stars appeared in the universe, but every step back in time takes them deeper into the early universe’s “formative years” when stars and galaxies were just beginning to emerge in the aftermath of the Big Bang. “We’re moving into a regime where there are big changes afoot. And what it tells us is that if we go back another couple hundred million years toward the Big Bang we’ll see absolutely dramatic things happening. That will be the time where the first galaxies really are starting to get built up,” says team member Garth Illingworth, of the University of California at Santa Cruz.

The even more distant proto galaxies will require the infrared vision of NASA’s James Webb Space Telescope and next-generation ground-based telescopes, such as the Giant Magellan Telescope. These new facilities, planned for later this decade, will provide confirming spectroscopic measurements of the tremendous distance of the object being reported today.

The newly discovered galaxy appears as a faint dot of starlight in the Hubble exposures. It is too young and too small to have the familiar spiral shape that is characteristic of galaxies in the local universe. Though individual stars can’t be resolved by Hubble, the evidence suggests that this is a compact galaxy of hot stars that first started to form over 100 to 200 million years earlier in a pocket of dark matter.

The first 500 million years of the universe’s existence is now the missing chapter in the hierarchical growth of galaxies. It’s not clear how the universe assembled structure out of a darkening, cooling fireball of the Big Bang. As with a developing embryo, astronomers know there must have been an early period of rapid changes that would set the initial conditions to make the universe of galaxies that exist today. Astronomers eagerly await the new space and ground-based telescopes to find out.