You are here: Home › News › Space › Hubble images provide farthest-ever montage of early Universe
By Will Parker on September 26, 2012 in News, Space 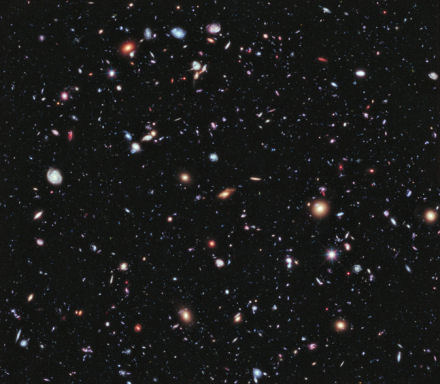 Using multiple images from the Hubble Space Telescope, astronomers have assembled a new, improved portrait of our deepest-ever view of the Universe. Called the eXtreme Deep Field (XDF), the hybrid image contains around 5,000 galaxies – some from a time when the Universe was only a few hundred million years old.

Garth Illingworth, principal investigator of the 2009 Hubble Ultra Deep Field programme, said most of the galaxies in the XDF image are young, small, and growing, often violently as they collide and merge together. “The early Universe was a time of dramatic birth for galaxies containing brilliant blue stars far brighter than our Sun. The light from those past events is just arriving at Earth now, and so the XDF is a time tunnel into the distant past when the Universe was just a fraction of its current age. The youngest galaxy found in the XDF existed just 450 million years after the Universe’s birth in the Big Bang,” he explained.

Illingworth said these baby galaxies are tiny and faint in the image, but nevertheless are the seedlings from which today’s galaxies grew. “The history of galaxies – from soon after the first galaxies were born to the great galaxies of today, like the Milky Way – is laid out in this one remarkable image,” he said. 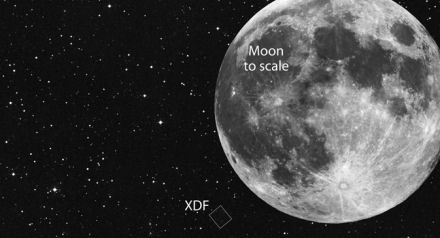 The XDF was created from images taken of a small area of space in the constellation of Fornax (The Furnace) between 2003 and 2004. More than 2,000 images taken with Hubble’s two primary cameras: the Advanced Camera for Surveys and the Wide Field Camera 3, were combined to form the XDF. The faintest galaxies in the image are one ten-billionth the brightness that the unaided human eye can see.

Antibiotic oomph: the eyes have it
Ancient Buddhist statue, filched by Nazis, was carved from meteorite