You are here: Home › News › Finally! Something that eats jellyfish
By Will Parker on July 16, 2010 in News 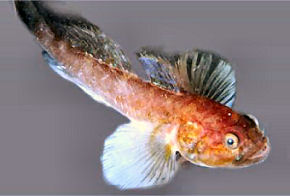 Jellyfish have few predators and the increasing incidence of ocean “dead zones” around the world has seen jellyfish populations explode in recent years. Now, however, ocean scientists have identified a common fish species that likes nothing better than jellyfish for dinner.

The research, published in Science, examined an oxygen-depleted dead-zone off the coast of southwest Africa. “Originally there were sardines in the area but over fishing caused the sardine population to collapse in the 1960s and 1970s,” said Penn State’s Victoria A. Braithwaite. “The sardines never recovered and jellyfish became a huge and serious problem, eating what the sardines had eaten.”

But the research team found that a 4-to-6-inch long fish known as the bearded goby (Sufflogobius bibarbatus) likes nothing better than a meal of jellyfish. The researchers said that their discovery shows jellyfish can play a part in the oceans’ food cycle. “We don’t know if they are eating dead jellyfish from the bottom, or if they are coming up to oxygen-filled layers to eat jellyfish, but they are eating jellyfish,” said Braithwaite.

Even stranger than a jellyfish diet is the gobies’ use of the dead zone in the area. One reason there were so many sardines and now so many jellyfish is a large area of up-welling water off the southwest coast of Africa from Namibia to South Africa. This deep cold water brings with it large amounts of nutrients. When plankton eat the nutrients, their populations increase massively. Excess nutrients and dead plankton then fall to the ocean floor.

“A horrible toxic sludge forms, and very few things can live in it except for some bacteria and nematodes,” said Braithwaite. “Somehow the gobies can withstand the toxic environment, but we don’t know exactly how they are doing it.”

Remarkably, the gobies cope without oxygen for hours at a time while they rest on the muddy seabed but remain alert. “When we touch them with a rod, they show rapid escape responses,” said Braithwaite.

Gobies can stay in the oxygen-depleted area for at least 10 to 12 hours at a time. The researchers suggest they may be able to remain there even longer. The mud is not just lacking oxygen, but the bacteria that live there use sulfur for energy and produce high levels of hydrogen sulfide, a toxic gas.

“Normally, other animals cope with anoxia [oxygen deprivation] by anaerobic respiration, which causes a build up in lactate,” said Braithwaite. “But something else is going on in these gobies as the lactate build up declines after an hour or so without oxygen. Our next step is to look to see what they are doing to cope with anoxia.”

For the goby, the anoxic, toxic mud is a perfect hiding place because no predators are willing to enter that environment. “It is a win-win situation where the gobies are using a resource that is usually a dead end in the ocean, the jellyfish,” said Braithwaite. “And they are using the toxic mud as a refuge. Together this seems to explain why their population is growing despite the fact that they are now the main prey species in this unusual ecosystem.”