You are here: Home › News › Beetles reveal ecological speciation in action
By Will Parker on November 2, 2009 in News 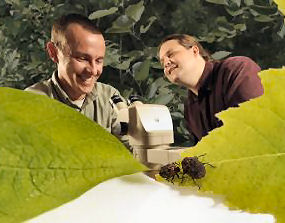 Tiny leaf beetles that flit among the maple and willow trees in Vermont are providing scientists with some of the clearest evidence yet that environmental factors play a major role in the formation of new species.

Vanderbilt University researcher Daniel Funk has been studying this odd group of leaf beetles (which resemble unappetizing caterpillar pellets) for 15 years. In recent years he and co-researcher Scott Egan have used Vermont populations that associate with red maples and Bebbs willows to investigate how divergent ecological habits promote speciation.

Their past observations have suggested that such “maple leaf beetles” and “willow leaf beetles” may be in the process of dividing into two new species: Each prefers to feed and lay eggs on their own “host plant,” where they grow and survive best. Although there is some intermixing, the beetles show a decided preference for mates from the same host. While maple and willow beetles are visually indistinguishable, the current degree of their divergence is highlighted by the willow beetles’ willingness to starve to death rather than feed on the maple leaves readily consumed by their maple beetle cousins.

The research, published in Proceedings of the National Academy of Sciences, has established these inconspicuous beetles as an important example of how ecological factors contribute to evolutionary divergence and the origin of Earth’s millions of species. “Without this process, life would not have the incredible number and variety of species that we take for granted,” says Funk.

Although ideas about ecological speciation were raised just after Darwin wrote his famous book, On the Origin of Species, most 20th century research focused on the role of genetic factors and geographic isolation in promoting speciation. More recently, however, studies supporting the idea have begun to accumulate. The current paper combines ecological, genetic and geographic information to build an in-depth case for the importance of environmental factors in the formation of new species.

Evolutionary biologists consider growth rate as a measure of survivability or fitness. So the hybrids’ lower fitness reduces opportunities for genetic exchange between beetle types by way of matings between surviving hybrids and the maple and willow beetles themselves. As a result, it promotes the reproductive isolation that pushes the two groups toward becoming distinct species.

“If the lower fitness of the hybrids were simply caused by overall genetic incompatibility, then both backcrosses should use the two tree types equally well,” says Funk. “On the other hand, if genes involved in adapting to one tree type or the other were the cause, then maple backcross individuals should do better when raised on maple than on willow and willow backcrosses should do better on willow than on maple.”

When the researchers measured the growth rates of the willow and maple backcrosses, that was what they found. This agreement provides extremely strong support for the interpretation that these beetles are undergoing ecological speciation, according to Funk.

A study by Funk and Egan published last year in the journal Evolution used molecular approaches to demonstrate that enough interbreeding is going on at the beetle site to thoroughly intermix most of their genes. However, it also showed that natural selection was still forcing the two groups apart by acting specifically on a minority of the beetle genes, those that were associated with the use of one tree or the other.

This, say the researchers, reflects the true power of natural selection, which has driven these beetles to become so intimately adapted to their host plant environment, promoting their speciation along the way. “It’s not a coincidence that plant-feeding insects are among the most ecologically specialized and the most species-rich groups on the planet,” says Funk.