You are here: Home › News › Lizards Pushed Into Evolutionary Fast Lane
By Will Parker on November 17, 2006 in News 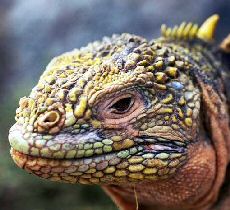 Evolutionary change is generally considered to be a pedestrian affair, with changes occurring over millennia. But evolutionary biologists from Harvard have shown that natural selection can occur within months, as a population’s needs change. Their study, appearing in the journal Science, was based on populations of the lizard Anolis sagrei that inhabits cays (small islands) in the Bahamas, and what happened when a new predator was introduced. The scientists found that natural selection dramatically reversed direction over a very short period, first favoring longer, and then shorter, hind legs.

Experiments where researchers are able to witness evolution in action have been something of a rarity. “Recent work has shown, however, that evolutionary biology can be studied on short time scales and that predictions about it can be tested experimentally. We predicted, and then demonstrated, a reversal in the direction of natural selection acting on limb length in a population of lizards,” explained Harvard’s Jonathan B. Losos.

Losos’ experiment involved introducing a predatory lizard (Leiocephalus carinatus) into some of the cays, while keeping six other control cays predator-free. The populations of both were sets of cays were counted, marked, and measured lizards prior to the introduction of the predators.

The indigenous lizard (Anolis sagrei) spends much of its time on the ground, but when a terrestrial predator is introduced, it takes to trees and shrubs, becoming increasingly arboreal over time. Losos and his colleagues hypothesized that immediately following a predator’s introduction longer-legged – and hence faster-running – Anolis lizards would be favored to elude capture. However, as the lizards grew ever more arboreal in habitat, the scientists projected that natural selection would begin to favor shorter limbs, which are better suited to navigating narrow branches and twigs.

In striking fashion, the researcher’s hypothesis was borne out. Six months after the introduction of the predator, Losos found that the Anolis population had dropped by half or more on the islands with the predators, and in comparison to the lizards on the predator-free islands, long legs were more strongly favored: Survivors had longer legs relative to non-survivors. After another six months, during which time the Anolis lizards grew increasingly arboreal, selective pressures were exactly the opposite: Survivors were now characterized by having shorter legs on the experimental islands as compared to the control islands.

The behavioral shift from the ground to higher perches apparently caused this dramatic reversal, Losos explained, adding that behavioral flexibility may often drive extremely rapid shifts in evolution. “Evolutionary biology is by its nature an historical science, but the combination of microevolutionary experimentation and macroevolutionary historical analysis can provide a rich understanding about the genesis of biological diversity,” he added.