You are here: Home › News › Uncanny valley response observed in monkeys
By Will Parker on October 14, 2009 in News 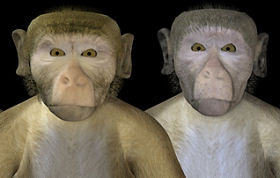 Researchers from Princeton University report that the uncanny valley, a phrase that describes the disquieting feeling that occurs when viewers look at (almost) realistic human-like animated characters or androids, has now been observed in monkeys.

Movie-goers may not be familiar with the term, but they understand that it is easier to love the out-of-proportion cartoon figures in the The Incredibles than it is to embrace the more realistic-looking characters in The Polar Express. For some reason, viewers are emotionally unsettled by images of artificial humans that look realistic but somehow, aren’t.

The uncanny valley hypothesis was introduced by the Japanese roboticist Masahiro Mori in 1970. The “valley” refers to a dip in a graph that charts a human’s positive reaction in response to an image on one axis and a robot’s human-likeness on another. People like to study other human faces, and they also can enjoy scrutinizing countenances that clearly are not human, such as a doll’s or a cartoon figure’s. But when an image falls in between – close to human but clearly not – it causes a feeling of revulsion.

Now, the Princeton researchers have found that macaque monkeys also fall into the uncanny valley, exhibiting this reaction when looking at computer-generated images of monkeys that are close but less than perfect representations. It is the first such finding in any animal other than humans. The researchers’ work appears in the Proceedings of the National Academy of Sciences.

In the experiments, the monkeys, which normally coo and smack their lips to engage each other, quickly avert their glances and are frightened when confronted by the close-to-real images. When asked to peer at the less close-to-real faces and real faces, however, they viewed them more often and for longer periods.

Despite the widespread acknowledgement of the uncanny valley as a valid phenomenon, there are no clear explanations for it. One theory suggests that it is the outcome of a “disgust response” mechanism that allows humans to avoid disease. Another idea holds that the phenomenon is an indicator of humanity’s highly evolved face processing abilities. Some have suggested the corpse-like appearance of some images elicits an innate fear of death. Still others have posited that the response illustrates what is perceived as a threat to human identity.

Moon Dust Could Be Key Ingredient For Giant Lunar Telescope

1973 Supernatural Thrillers #3 Valley of the Worm