You are here: Home › News › Researchers Plan Soft-Bodied Robots
By Will Parker on January 29, 2007 in News 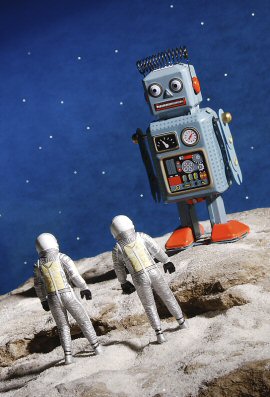 Anybody that’s watched a robot move around knows that the potential of hard-bodied robots remains limited by their stiff construction and lack of flexibility. To tackle this awkwardness, researchers at Tufts University have launched a multidisciplinary initiative focused on building a new class of robots that are completely soft-bodied.

According to Tuft’s David Kaplan, co-director of the Biomimetic Technologies for Soft-bodied Robots project, the venture will bring together experts in the fields of biology, bioengineering and micro/nano fabrication. “Our overall goal is to develop systems and devices [for] soft-bodied robots based on biological materials and on the adaptive mechanisms found in living cells, tissues and whole organisms,” he explains.

Teaming up with Kaplan is Barry Trimmer, a professor of biology at Tufts who believes that a major characteristic that distinguishes man-made structures from biological ones is the preponderance of stiff materials. “In contrast, living systems may contain stiff materials such as bone and cuticle but their fundamental building blocks are soft and elastic. This distinction between biological and man-made objects is so pervasive that our evaluation of artificial or living structures is often made on the basis of the materials alone,” explains Trimmer.

The Tufts team is aiming for a truly soft-bodied locomoting robot with workspace capabilities similar to those of a living animal. Their work will focus on four primary areas: Control systems for soft-bodied robots, biomimetic and bionic materials, robot design and construction, and development and application of research-based platform technologies.

Trimmer believes his previous work with caterpillars will provide useful insights into how to build the world’s first soft-bodied robot. He has been studying the nervous system and biology of caterpillars since 1990 to better understand how the creatures can control their fluid movements using a simple brain and how they can move so flexibly without any joints. He hopes to adapt his caterpillar research to this new project using the expertise of Tufts engineers.

Kaplan, whose laboratory focuses on biopolymer engineering, recently created a “fusion protein” that for the first time combined the toughness of spider silk with the intricate structure of silica. Kaplan says that there has been tremendous progress in the development and use of soft materials in devices ranging from keyboards to toys. “However, it is very hard to make soft devices that move around and can be precisely controlled,” he says. “This is the fundamental reason why robots currently move like robots instead of lifelike animals.”

The researchers say that the new robots will be continuously deformable and capable of collapsing and crumpling into small volumes. They will have capabilities that are not currently available in single machines including climbing textured surfaces and irregular objects, crawling along ropes and wires, or burrowing into complex confined spaces. “Soft-bodied robots could make many dangerous surgeries much safer and less painful,” Trimmer explains. “They could also be used by NASA to repair space stations by reaching places that astronauts can’t, perform more complicated tasks in industry that require flexibility of movement, help in hazardous environments like nuclear reactors and landmine detection, and squeeze more efficiently into tight spaces.”

The team will work from a recently expanded multi-disciplinary Tufts facility at Medford. Known as the Advanced Technologies Laboratory (ATL), the 23,000-square-foot space includes a tissue engineering facility, a biomimetic devices laboratory, a soft materials characterization laboratory, and a micro/nano fabrication laboratory with 1,500 square feet of “Class 1000” clean room space.

Related articles:
Direct Brain Control Of Robot Demonstrated
Novel Robot Will Be “Dynamic And Graceful,” Says Prof
A Portrait Of The Artist As A Tin Man