You are here: Home › News › Drug Discoverers Opt For The Life Aquatic
By Will Parker on May 22, 2006 in News 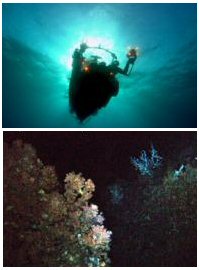 Harbor Branch and University of Miami scientists this week left to explore newly discovered deep-sea reefs between Florida and the Bahamas in the hope of discovering marine organisms with the potential to treat diseases such as cancer and Alzheimer’s. The reefs were discovered in 2,000 – 2,900 feet of water last December by a University of Miami team using advanced sonar techniques. “We’ve found incredible and surprising diversity at other deepwater reefs near Miami and Bimini, and some promising potential disease treatments, so we’re very excited about the chance to explore these new areas,” says Amy Wright, director of the Harbor Branch Division of Biomedical Marine Research.

The reefs were discovered in December of 2005 by University of Miami researchers using an autonomous underwater vehicle (AUV) equipped with advanced sonar technology. AUVs operate without a tether to the surface and are pre-programmed to independently perform tasks. The AUV revealed what appears to be an extensive system of steep slopes and mounds as high as 350 feet, all of which are likely to harbor a wide array of sponges, corals, fish, and other animals.

A camera allowed researchers to get an enticing glimpse of the bottom (pictured), but until researchers make it to the seafloor, they will not be able to determine the extent and biological diversity of the newly discovered reefs.

The team will explore those seafloor areas that appear most promising based on their sonar map contours. As this “ground truthing” work progresses, the team will be able to better predict correlations between map data and biodiversity on the bottom. Ultimately this will allow them to more accurately assess the ecological importance of the entire area, not just those small swaths observed from the submersible. During each submersible dive, Harbor Branch experts will be collecting samples of organisms such as sponges and corals that will be tested to determine if they, or microorganisms living within them, produce chemicals with pharmaceutical potential. A key goal is to find and collect organisms that have never been seen. Other organisms will also be collected because even well known species can produce different and potentially important chemicals depending on the depth, temperature, and location at which they are found.

The search for drugs from the sea began at Harbor Branch in the early 1980s and has led to the collection of tens of thousands of marine organism samples and the identification of a number of promising potential drugs now in various stages of development for treating cancer, Alzheimer’s, malaria, AIDS and other ailments.