You are here: Home › News › Modified Newtonian dynamic could do away with dark matter
By Will Parker on May 6, 2009 in News 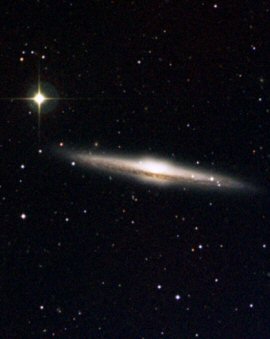 As modern cosmology comes to rely more and more on “dark matter” to explain otherwise inexplicable observations, there continues to be no direct proof that it actually exists. And even if it does exist, there is some doubt amongst physicists as to whether it would be able to reconcile all the discrepancies between actual measurements and predictions based on theoretical cosmological models. Consequently, the number of physicists questioning the existence of dark matter has been increasing for some time now. And while competing theories of gravitation have been developed independent of dark matter, they conflict with Newton’s theory of gravitation. Now, however, some physicists are beginning to ask whether the theory of gravitation might be wrong.

“Maybe Newton was indeed wrong,” declares Professor Dr. Pavel Kroupa of Bonn University�s Argelander-Institut f�r Astronomie (AIfA). “Although his theory does, in fact, describe the everyday effects of gravity on Earth, things we can see and measure, it is conceivable that we have completely failed to comprehend the actual physics underlying the force of gravity.”

This controversial hypothesis has gained increasing ground in recent years, especially in Europe. And two new studies could well lend further support to it. In these studies, Professor Kroupa and his former colleague Dr. Manuel Metz, working in collaboration with Professor Dr. Gerhard Hensler and Dr. Christian Theis from the University of Vienna, and Dr. Helmut Jerjen from the Australian National University, have examined so-called “satellite galaxies,” a term used to describe the dwarf galaxy companions of the Milky Way, some of which contain only a few thousand stars.

But a detailed study of these stellar agglomerates has revealed some intriguing qualitites. “First of all, there is something unusual about their distribution,” Professor Kroupa explains. “The satellites should be uniformly arranged around their mother galaxy, but this is not what we found. More precisely, all classical satellites of the Milky Way – the eleven brightest dwarf galaxies – lie more or less in the same plane, they are forming some sort of a disc in the sky.” Additionally, the research team has been able to show that most of these satellite galaxies rotate in the same direction around the Milky Way – like the planets revolve around the Sun.

Kroupa’s group believes that this phenomenon can only be explained if the satellites were created a long time ago through collisions between younger galaxies. “The fragments produced by such an event can form rotating dwarf galaxies,” explains Dr. Metz. But there is an interesting catch to this crash theory. “Theoretical calculations tell us that the satellites created cannot contain any dark matter,” he notes.

But this notion is contradicted by another observation. “The stars in the satellites we have observed are moving much faster than predicted by the Gravitational Law. If classical physics holds this can only be attributed to the presence of dark matter,” Metz says.

Some basic fundamental principles of physics have been incorrectly understood, according to Kroupa. “The only solution would be to reject Newton’s classical theory of gravitation,” he says. “We probably live in a non-Newton universe. If this is true, then our observations could be explained without dark matter.”

It would not be the first time that Newton’s theory of gravitation has had to be modified over the past hundred years. This became necessary in three special cases: when high velocities are involved (through the Special Theory of Relativity), in the proximity of large masses (through the theory of General Relativity), and on sub-atomic scales (through quantum mechanics).

The deviations detected in the satellite galaxy data support the hypothesis that in space where extremely weak accelerations predominate, a “modified Newton dynamic” must be adopted. This conclusion has far-reaching consequences for fundamental physics in general, and also for cosmological theories.