You are here: Home › News › Tortoise-Hare Executive Functions Of Brain Identified
By Will Parker on June 20, 2007 in News 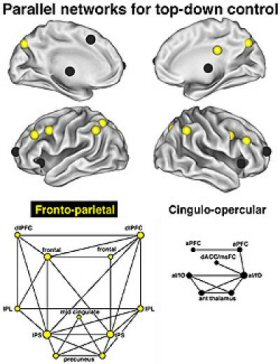 The human brain’s chain-of-command relies on not one, but two quite different – although complementary – command-and-control areas, according to neuroscientists at the Washington University School of Medicine.

These two “commanders” are brain regions that do not consult each other but still work toward a common purpose – the control of voluntary, goal-oriented behavior. This includes activities like reading or singing, but not involuntary behaviors such as digestion.

Stable systems independently controlled by two or more “masters” are not uncommon and are known as complex adaptive systems. Scientists use an approach called network dynamics to study these systems in biology, ecology, economics and computer science. However, it was not expected that such a system operated in the human brain. “This was a big surprise. We knew several brain regions contribute to top-down control, but most of us thought we’d eventually show all those regions linking together in one system, one little guy up top telling everyone else what to do,” said study author Steven Petersen.

The findings, appearing in the Proceedings of the National Academy of Sciences, may aid efforts to understand the effects of brain injury. “For example, on rare occasions patients with brain injuries will develop behaviors that are stimulus-bound: Every time they encounter a particular stimulus, they respond exactly the same way,” explained co-researcher Nico Dosenbach. “One man with a brain injury started undressing everytime he saw a bed – regardless of whether it was in a furniture store or his own bedroom. This research may help us understand what’s happening to these patients.”

The study builds on earlier work by the team that identified brain regions that were consistently active as volunteers prepared for a mental task. The application of brainpower in customized ways is at the heart of the brain’s formidable capabilities. It means that the brain can take a single stimulus (for example, seeing the printed word “dog” on a page) and do many different things with it (read it aloud, create a mental picture or produce a list of associated verbs). Using fMRI scans, the researchers identified 39 brain regions that consistently became active before the brain goes to work on a task.

For the new study, the researchers used a different brain scanning technique called resting state functional connectivity MRI. For this technique, volunteers are asked to relax while their brains are scanned instead of working on a task. Research elsewhere has shown that variations in MRI scan results occur even when volunteers are idle, and that these variations can be studied for useful insights into brain function and architecture.

Using resting state functional connectivity MRI, the team identified pairs of brain regions which were roughly in synch with each other, implying the regions are likely working together. Turning to graph theory (a branch of mathematics that visually graphs relationships between pairs of objects), the team then graphed the results, representing each brain region with a shape. They drew a line between paired brain regions if their blood oxygenation patterns correlated tightly enough. “You might expect that everything is connected to everything, and you would get sort of a big mess and not much information,” Dosenbach explained. “But that’s not at all what we found. Even at low levels of correlation, there were two sides to these graphs. Brain regions on either side had multiple connections to other regions on their side, but they never connected to regions on the opposite side.”

Having established that two control networks existed, researchers turned back to their functional brain scans for insight into the networks’ roles. One network, dubbed the cinguloopercular network, was linked to a “sustain” signal. “When you start doing a task, this signal turns on,” Petersen said. “It stays constant while you’re doing the task, and then when you’re done it turns off.” In contrast, the frontoparietal network was consistently active at the start of mental tasks and during the correction of errors.

“This maps very nicely onto another idea that’s common in network dynamics and adaptive systems,” Dosenbach added. “This is the idea that the factors controlling adaptive systems often act on different time scales. We think the frontoparietal network may be the more online, rapid-adapting controller, while the cinguloopercular network is the more stable, set, in-the-background controller.”

This doesn’t mean the cinguloopercular network never calls for a change of course, however. “It just does that on a slower time scale, to make sure you don’t needlessly throw out all the work you’ve already done,” Dosenbach said. “It’s amazing: on the one hand, the brain can be very flexible and rapidly adapt to changing feedback, but it can also lock in on something and tune out distractions until the task is finished. And these two separate control systems that work toward the same goal without actually talking to each other likely help create this powerful flexibility.”

Love the pain away