You are here: Home › News › Monkeys Demonstrate Metacognitive Skills
By Will Parker on April 23, 2007 in News 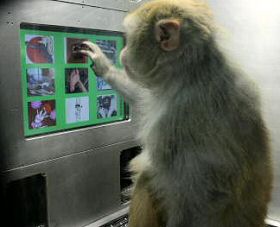 The ability to reflect on one’s knowledge was thought of as an exclusively human ability, but it seems that other primates can engage in meta-cognition as well, say researchers from Columbia’s Primate Cognition Laboratory. The work, detailed in Psychological Science, was designed to show that a monkey could express its confidence in its answers to multiple-choice questions about its memory based on the amount of imaginary currency it was willing to wager.

The experiment was derived from the observation that children often make pretend bets to assert that they know the answer to some question. “We designed a task to determine if a non-human primate could similarly learn to express its confidence about its knowledge by making large or small wagers,” explained researcher Lisa Son. In the experiment, the monkeys were trained to play a video game that would test their ability to remember a particular photograph while also allowing them to make a large or a small bet. Ultimately, this wager would reflect the monkey’s perception of their memory accuracy.

The results demonstrated that there was a strong correlation between high-risk bets and correct responses, and between low-risk bets and incorrect responses. “The pattern of the monkeys’ bets provided clear evidence of their ability to engage in meta-cognition, an ability that is all the more remarkable because monkeys lack language,” noted Columbia’s Herbert Terrace.

The results may have implications beyond our understanding of primate behaviors. “Our results are of general interest because non-verbal tests of the type used in this and other experiments on animal cognition can be adapted to study cognitive abilities of infants and autistic children,” said Terrace.