You are here: Home › News › Clays Exhibit Novel Antibacterial Properties
By Will Parker on November 2, 2006 in News 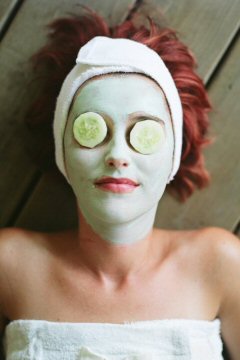 Beauty treatments that use clay aren’t new, but clay-based medicinal treatments are. And if Arizona State University’s (ASU) Lynda Williams and Shelley Haydel’s research pans out, then clay might one day become an antibacterial standard like penicillin. “We use maggots and leeches in hospitals, so why not clay?” Haydel asks.

The ASU duo have just received a substantial grant from the National Institutes of Health that will allow them to examine the mechanisms that allow two clays mined in France to heal Buruli ulcer, a flesh-eating bacterial disease found primarily in central and western Africa. Buruli ulcer (related to leprosy) is caused by Mycobacterium ulcerans, which produces a toxin and destroys the fatty tissues under the skin. It was recently declared to be “an emerging public health threat” by the World Health Organization (WHO).

“The toxin is immunosuppressant; the patients feel no pain and the body mounts no response to infection. It leads to disfigurement, isolation, not unlike that seen in leprosy,” Haydel explained. “Traditional antibiotics can only make a difference at the very earliest stages of the disease, so treatments have, in the past, been largely confined to amputations or surgical excision of the infected sites.” Haydel and Williams believe that the French clay may represent a new form of treatment, one that goes beyond the capabilities of existing antibiotics.

The new research was sparked by health clinics on the Ivory Coast that had been using two French clays to successfully treat Buruli ulcer. The startling results impressed the WHO, but the lack of supporting scientific studies meant that funding for the initiative was refused. Ivory Coast doctor, Thierry Brunet de Courssou, who had been using the clays, then put out a call for help which Williams and Haydel responded to. “I answered a posting on the Clay Mineral Society’s listserve placed by Thierry. He was asking to have someone take high resolution scanning electron micrographs of the clays,” Williams explains.

Williams not only took the micrographs of the minerals, she went a step further and examined their crystal structure and chemical compositions. She then recruited Haydel who brought more than 13 years of experience with pathogenic bacteria, in particular tuberculosis, to the project. “I approached this work from the viewpoint of a clinical microbiologist,” Haydel says. “I ordered bacterial strains that pharmaceutical companies use to test their antimicrobials.”

The duo tested both of the French clays that Brunet de Courssou had been using. One completely inhibited pathogenic Escherichia coli, Salmonella typhimurium, Pseudomonas aeruginosa and Mycobacterium marinum. It was also found to partially inhibit the growth of pathogenic Staphylococcus aureus, including a multi-drug resistant variety. But results from the other clay weren’t so exciting. “The other clay actually helps the bacteria to grow,” Haydel lamented. The researchers don’t know why one clay kills bacteria and the other promotes growth.

Clay is a mineral with a crystalline structure that Williams likens to a peanut butter and jelly sandwich. The “bread” is composed of three regions, two silicate layers with tetrahedral rings bounding an octahedral core. The “peanut butter” is the charged cations, for example, potassium, that stick to the negatively charged tetrahedral ring surface. And the jelly? Mainly organic compounds, says Williams. The interlayer, as the peanut butter and jelly are termed, can vary in width and composition depending on the kinds of waters and elements present when it was formed. It is this interlayer where much of the elemental variability between clays can be found.

In the case of the two French clays, the chemical structures are almost identical, but the different trace element chemistry of the interlayer records an older geologic condition, from a time when the antimicrobial property was likely inherited. Preliminary results suggest that while the antibacterial activity is associated with the interlayer, crystal size and structure also seem to play a role. Haydel and Williams hope that their continuing research will lead to a better understanding of the clay’s unique properties