You are here: Home › News › Microbial Fuel Cell Produces Hydrogen & Cleans Wastewater
By Will Parker on April 29, 2005 in News 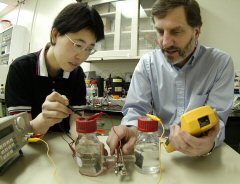 Using a new electrically-assisted microbial fuel cell (MFC) that does not require oxygen, researchers have developed the a process that enables bacteria to coax four times as much hydrogen directly out of biomass than can be generated typically by fermentation alone.

Dr. Bruce Logan, the Penn State professor of engineering and co-inventor of the MFC, says, “This MFC process is not limited to using only carbohydrate-based biomass for hydrogen production like conventional fermentation processes. We can theoretically use our MFC to obtain high yields of hydrogen from any biodegradable, dissolved, organic matter – human, agricultural or industrial wastewater, for example – and simultaneously clean the wastewater. While there is likely insufficient waste biomass to sustain a global hydrogen economy, this form of renewable energy production may help offset the substantial costs of wastewater treatment as well as provide a contribution to nations able to harness hydrogen as an energy source.”

The new approach is described in a paper appearing in Environmental Science and Technology. In their paper, the researchers explain that hydrogen production by bacterial fermentation is currently limited by the “fermentation barrier” – the fact that bacteria, without a power boost, can only convert carbohydrates to a limited amount of hydrogen and a mixture of ‘dead end’ fermentation end products such as acetic and butyric acids. However, giving the bacteria a small assist with a tiny amount of electricity – about 0.25 volts or a small fraction of the voltage needed to run a typical 6 volt cell phone – they can leap over the fermentation barrier and convert a ‘dead end’ fermentation product, acetic acid, into carbon dioxide and hydrogen.

Logan said that the new work was based on a previous fuel cell they had developed. “Basically, we use the same microbial fuel cell we developed to clean wastewater and produce electricity. However, to produce hydrogen, we keep oxygen out of the MFC and add a small amount of power into the system.” In the new MFC, when the bacteria eat biomass, they transfer electrons to an anode. The bacteria also release protons which go into solution. The electrons on the anode migrate via a wire to the cathode, where they are electrochemically assisted to combine with the protons and produce hydrogen gas. A voltage in the range of 0.25 volts or more is applied to the circuit by connecting the positive pole of a programmable power supply to the anode and the negative pole to the cathode.”This new process demonstrates, for the first time, that there is real potential to capture hydrogen for fuel from renewable sources for clean transportation,” said Logan.

Primordial Meteorite In A Class By Itself