You are here: Home › News › Sleeping Less And Self-Deluding More
By Will Parker on July 5, 2006 in News 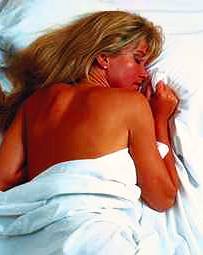 New findings published in the American Journal of Epidemiology not only reveal that we don’t get enough sleep, but that we don’t get as many Z’s as we think we do. Other findings in the University of Chicago study show that blacks, men, and the poor, sleep less than whites, women and the affluent; and that sleep deprivation may be linked to some very serious health problems.

The study’s findings are based on the sleep characteristics of 669 middle-aged adults. The researchers found that while each subject spent an average of 7.5 hours in bed, they only spent 6.1 hours asleep. “People don’t think they get enough sleep and they get less sleep than they think,” said study author Diane Lauderdale, at the University of Chicago. “As we learn more and more about the importance of sleep for health, we find evidence that people seem to be sleeping less and less.”

While the study highlights significant variations based on gender, race and affluence, it was not the intention of the researchers to attribute any specific cause behind these variations. They did, however, provide some suggestions for the variations, perhaps as a first step toward further research. “People who make more money may have fewer worries, or they may have more control over their sleep environment,” Lauderdale suggested, adding that the findings are: “consistent with sleep being on the causal pathway between socioeconomic status, or race, and disease risk.”

The new study also raises questions about previous research that suggests we are sleeping less now than we did in 1900 or in the 1970s, when people reported sleeping 9 and 7 hours a night respectively. “Our study tells us that we can’t entirely trust those earlier surveys,” Lauderdale said, “because people do not know how much they sleep.”

According to the team, their findings are far more accurate than prior studies, because their study was the first to incorporate sleep diaries with a technique called wrist actigraphy. The actigraphy device is a wristband equipped with a motion detector that measures when people actually fall asleep, rather than just recording the time that they go to bed. The test subjects wore the device for a total of 3 days and nights, while also logging the hours that they spent in bed. They found that participants spent 7.5 hours in bed, and took 22 minutes to fall into a sleep that lasted an average of 6.1 hours. This data was then used in a sleep equation (time asleep divided by time in bed), which showed that the test subjects had a total sleep “efficiency” of 81 percent.

As hypothesized, the team found that their sleep efficiency figures were “remarkably lower” compared to that of many prior studies, according to Stuart F. Quan of the University of Arizona in a commentary. “Although sleep scientists have generally accepted that the average sleep duration of Americans has been declining in parallel with our transformation to a frenetic 24-hour society,” Quan wrote, “most sleep clinicians would consider those values indicative of sleep deprivation even by current standards.”

While it is common knowledge that sleep deprivation can significantly impair concentration, studies are increasingly associating less sleep with various medical problems, including obesity, diabetes and hypertension. “There are many temptations to sleep less, but there is a growing body of evidence that this would be unwise,” said Lauderdale.

And what of Lauderdale’s own sleeping habits? “I try to get at least seven hours a night, I can’t function the next day without it.” And if all else fails, there’s always caffeine.